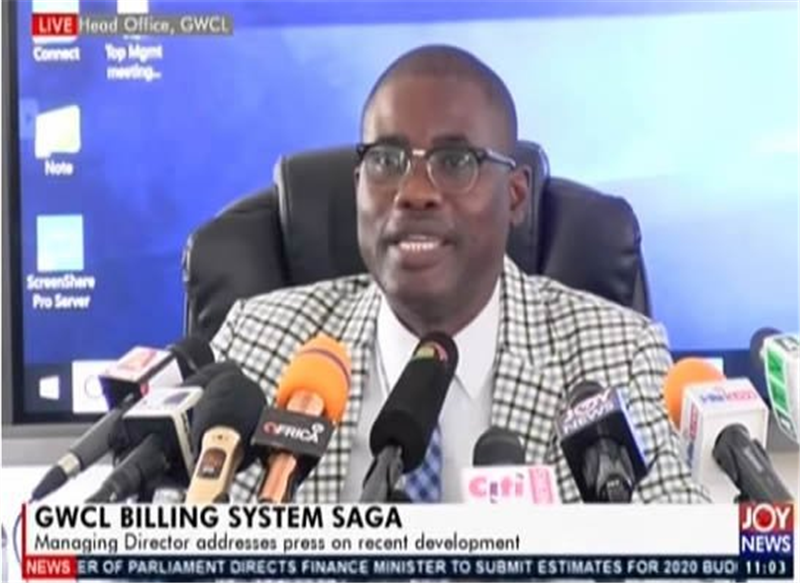 Managing Director of Ghana Water Company Limited (GWCL), Dr Clifford Abdallah Braimah, has justified a decision to terminate a billing system contract with IT firm, SOFTtribe, citing a sharp dip in the utility company’s bottom line as one of the key reasons.

Addressing the press at the GWCL’s head office in Accra on Thursday, Dr Braimah alleged that the water billing system developed problems that SOFTtribed seemed unable to solve despite giving the renowned IT company time to resolve.

The four main problems that were impeding GWCL’s operations, according to Dr Braimah included: inconsistency between the balance on statement of account of customers and their water bills. He said this made it difficult to handle customers’ queries.

Another problem, according to the GWCL’s MD, was the software, which was installed in 2016, by 2018 had started billing customers with wrong tariffs; also the e-readers were not functioning.

All these problems also made it impossible for the GWCL to monitor the entire billing process.

“Because of these,our [GWCL] revenue dipped from GHS67 million to GHS60 million. At a point, we were even getting up to GHS60 million…And if you are a managing director and your cash flow is taking a nosedive, nobody will tell you to take the decisive decision…” he said.

“They confiscated all our phones. Initially, they wanted to take our laptops then they decided not to take them. So currently, none of our technical staff or directors is without phones and we can’t operate as a company, he said Tuesday on Joy FM’s Super Morning Show.

He told the host of the show, Daniel Dadzie, that one of the company’s technical staff was detained “and taken to the Ghana Water Company head office.”

Subsequently, Founder of the company, Herman Chinery-Hesse, called out the armed National Security personnel for their heavy-handedness at the Airport Residential office of the software company.

Demanding the immediate return of the seized phones, Herman Chinery-Hesse said Wednesday that he suspects the operation was not approved by the appropriate authorities.

He also alleged that since the inception of the contract, through to when it was unfairly terminated, some persons at GWCL– whose identities he failed to reveal – have been scheming to extort money from SOFTtribe.

He suspects that evidence of the extortion (which were on the mobile phones but have been securely backed up) was the reason National Security operatives swooped his firm's Airport Residential office and seized phones.

He said the SOFTtribe contract was terminated because the firm fought off the extortion attempt by persons inside GWCL.

Mr Chinery-Hesse said he has no problem if GWCL wants to terminate the agreement to use the software that was developed by local IT brains to rake in money for Ghana but he wants the termination clauses to be adhered to, and the right price paid.

But reacting to some of these claims at his press encounter on Thursday, Dr Braimah said it was unfortunate that SOFTtribe would allege in public that some vile persons were trying to extort money from his firm for winning the contract when the company could have just gone to the police.

He said GWCL was a promoter of local businesses because the problems with the billing system notwithstanding, GWCL board allowed the company to put things right they failed.

“As a business-friendly institution, we still gave them time to deal with it. Their CEO wrote to inform us that they will fix the problem within a maximum of three months. Since October 2018, they have not been able to fix the problem. It is not fixed, we still have the problem pending.

“They shifted the goal post and informed us that all we need to do is to buy point of sale devices and we procured 252…it is more than a year now, we have not been able to use them because they cannot integrate them into their system,” he said.