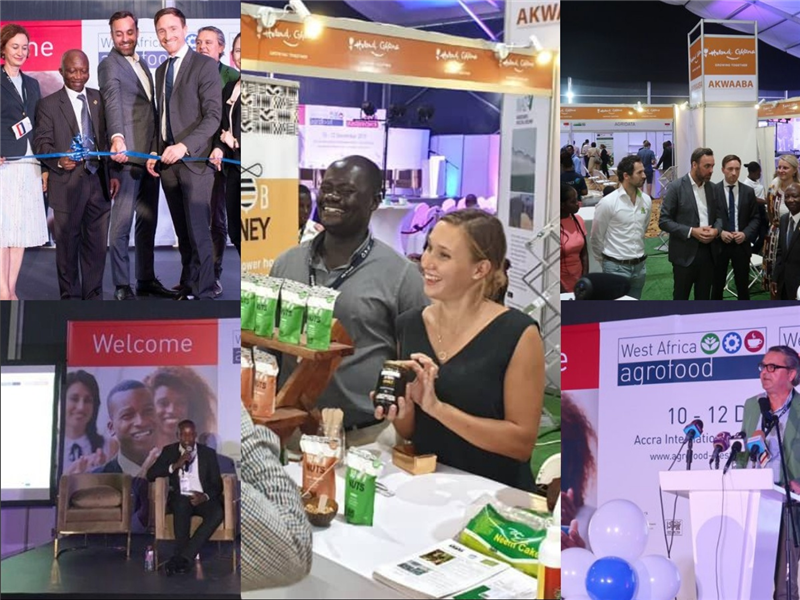 The 6th edition of agrofood & plastprintpack West Africa 2019 was officially opened by Mr. Paul Maerz, MD of the Fair Trade Messe (Germany) on Tuesday the 10th of December. After introductory speeches of among others Mr Bram Wits, Agricultural Counsellor of The Royal Netherlands Embassy as well as Mr Tjalling Wiarda, GM of the GNBCC, a ribbon was cut by Mr Kwae, Director Domestic Trade of the Ministry of Trade and Industry.

After the official opening, the group of dignitaries including the Turkish Ambassador Mrs  Ölem Gülsün Ergün Ulueren visited the different pavilions at the Fair including the Dutch Orange Pavilion. Here a number of Dutch and Ghanaian companies – including GNBCC Members- showcased their products.

The Orange pavilion was initiated by Hortifresh – developing the fruit and vegetable sector in Ghana – and assisted by GNBCC. Next to Hortifresh and GNBCC, the pavilion hosted the Bio Ghana Network with GNBCC Member Agro Eco; this network contains Green Gro (products for pest control and against animal infections, against armyworms), Bothapraku (citrus, lemon and lime peels as well as fresh lemon and lime)  So-B- Green and Mc Daniels Organic Food (both from the organic box) and Ideal Providence Farms (producer of organic shea products, fruits and vegetables). Also present was IWAD – Integrated Water & Agric Development which is part of GNBCC Member African Tiger, IWAD stand showcased maize, rice and soja seeds. GNBCC Member Wienco / RMG presented their rice and agro-inputs. Also present Delphi – offers Midtech Greenhouses and Rijk&Zwaan who offers in Ghana vegetable and fruit seeds. There was an official signing ceremony taking place at Rijk& Zwaan stand concerning their partnership with Greentech – trainers in irrigation and horticulture.

Next to the Dutch Orange Pavilion, our southern neighbours of Flanders (Flanders Investment Trade – FIT) were present,  showcasing a number of companies such as Filliers Distillery (creating premium spirits such as grain jenevers/gins). The fair took 3 days – until Thursday the 12th of December and during the fair different seminars and panel discussions were held. On Wednesday GNBCC’s Barnabas Apom spoke at the “ Challenges and solutions” on the subject of Non-Traditional Exports to Europe together with Mrs Afua Asabea Asare, CEO of the GEPA (Ghana Export Promotion Authority)

In 2 years’ time the Agro-Food Fair will return to Accra, next year it will be held in Abidjan.