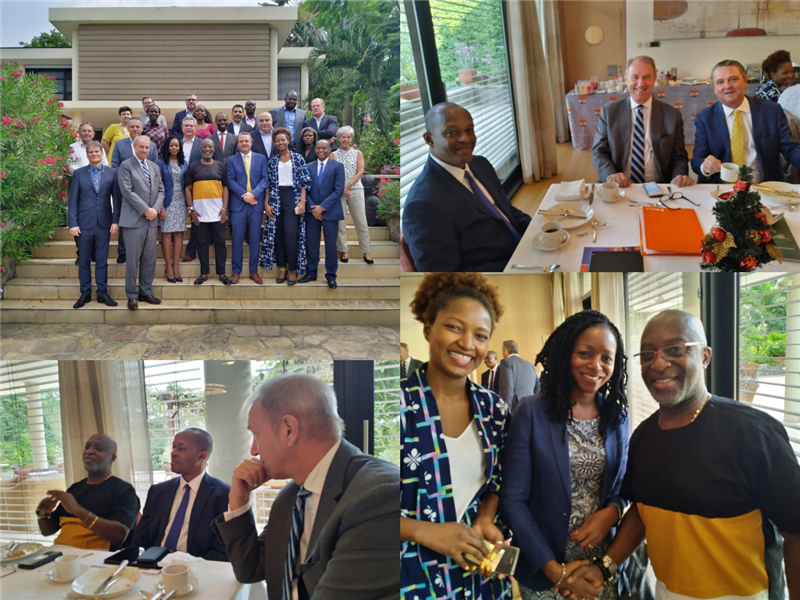 Wednesday morning the yearly Premium Member Business Breakfast was held at the Ambassador’s Residence. After everybody had taken breakfast and was seated, our Ambassador Ron Strikker welcomed the participants and opened the breakfast session.

After him, Mrs. Adelaide Benneh-Prempeh, GNBCC’s new Board Chair, held a speech welcoming the Premium Members and informing them about last week’s GIPC event where she was a panel member. During that seminar the challenges of access to money, the high-interest rates for borrowing money as well as the inflation rates were discussed, all issues of importance to current and future investors.

Subsequently, Mr. Vish Ashiagbor, PwC’s Director and Partner, held a speech on the macro-economic situation and the last budget as presented by the Ghana government.

In his speech he commented on the deficit figures, which are below the 5% threshold, a goal set out by the government. He remarked that certain costs are so-called ring-fenced and as a result, are not taken into account in the deficit figures as presented by the Government. Basically the major challenges not taken into account are the banking crisis (and the resulting costs which can be considered as not regular or returning ) and the energy crisis. The IMF has presented the Ghana deficit figures last week in her report taking into account these costs of the banking and energy crisis and presented logically a higher deficit: for 2019 7% (instead of 4,7%) and 6,5% for 2020 (instead of 4,9%). Also, the IMF warned that due to the Banking and Energy issues the level of debt has increased to 62 to 63 % (gross public debt as percentage of GDP), but having said that and seeing that Ghana is not yet out of the woods, the positive remark is that it doesn’t look bad when looking ahead (and seeing the continuous growth). The challenge for the Ghana government is to increase revenue and taxation income. This should be done by diversification of revenue, for instance, the informal sector still hardly contributes and now increases are foremost concentrated upon the formal economy: those who already pay are targeted.  This should and must change in the near future when more and more informal business will be formalized by the current measures of the government  (digitalization)

In his contribution, Mr. Yofi Grant focused on the coming AfCFTA which already started positively for Ghana because Ghana will host the AfCFTA Secretariat. In 2050 the continent of Africa will have the biggest population (and hence market) of the world, overtaking China and India. It will comprise out of a young population (which generates a lot of opportunities and challenges). The continent Africa has the most raw materials in the world, especially those raw materials with increased importance such as cobalt and lithium. More and more parts of the world see the increased significance of the African continent which is illustrated by the conferences organized by countries such as France, Russia, Japan, China, and the UK on and with African countries. Of all the 25 fast-growing economies in the world period 2010-2019, at least 6 of them are from Africa (Ethiopia, Rwanda, Ghana, Ivory Coast, Tanzania, and Niger) with average yearly growth rates of at least 6,1%. Also important is the fact that a lot of the African diaspora is returning to the African continent bringing investment and knowledge plus the will to improve their countries. AT present GIPC is working on stimulation measures for investors, especially those investors related to the SDG goals (Sustainable Development Goals). Also, changes will be implemented where the local content laws will be more focused on partnerships, meaning incentives will be introduced to stimulate investors to seek and involve local partners. Also, more Capex investments in Ghana will be made (roads, rails, airports, etc.) to create an enabling business environment and prepare Ghana for AfCFTA.

After Yofi’s contribution, our Ambassador thanked Yofi as well as Vish and Adelaide for their contributions and opened the floor for questions, comments, and remarks. In his contribution, GNBCC’s  Tjalling Wiarda asked some questions which illustrate a number of concerns of the larger business community, supported by some other remarks of the participants.  There was mentioning of the worsening safety situation in Burkina Faso which is high on the agenda of the security agencies in Ghana, the increased pressure of the GRA tax authority towards a number of companies. Advise here was that companies can sometimes manage this by being pro-active towards GRA, the situation concerning Free Zone companies; it was mentioned that because of the coming AfCFTA there will be changes coming to Free Zone but that will be prepared in consultation, the investment in roads which is good but there is a concern of the increasing number of roadblocks (see borderless alliance report). A great number of the roadblocks are indeed maybe irritating but they are also there to improve on safety.

In all it was a successful meeting, now held for the third time, becoming a tradition !!