Who Can Afford A Kantanka Car? 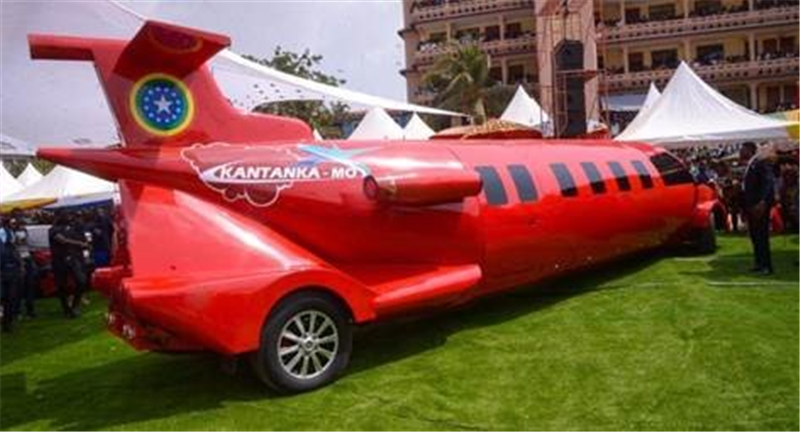 A vehicle that is able to detect the dizziness or drunkenness of its driver and automatically shuts down when the driver sleeps behind the steer or over-speeds. An advanced armoured vehicle fixed with a laser rangefinder. Robots that perform security guard duties.

All of these, not only made-in-Ghana, but by a man whose highest educational attainment is a course at the Ghana Technical Works Institute in Kumasi plus three years training as a welder with the Volta Aluminium Company (VALCO)!

Further afield as one gets conducted round at the annual technology fair mounted by the Kantanka Group of Companies, the accomplishments of Apostle Kwadwo Safo get even more dizzying: vehicles that obey oral commands — in Akan! Military vehicles that can be steered with a wrist watch. Another that can be started by pointing a cane at it, or placing your hand on your chest while wearing a special shirt!

Any man capable of making a car ceases to be a wonder when he comes out with a 26-foot stretch limousine. But it beggars belief when this technical school graduate invents a limousine with an in-built high-sensitive long distance viewer that sees as far as 200 metres ahead and behind.

Among Apostle Kwadwo Safo’s latest admirers is Dr Ken Nii Aryeetey, a medical practitioner. For him Apostle Safo’s inventions “are nothing short of genius”.

Unlike millions of Ghanaians who remain permanently dazed by the incredible display of Kantanka’s genius, however, this former medical doctor of Ghana’s Parliament recovers quickly and wonders aloud: “What is the point in having all these technological sophistications if we can’t make them available to ordinary Ghanaians or to organisations?”

His position is somewhat akin to that of musician Shatta Wale who thinks that “Apostle Safo has too much money and he does not know what to do with it, that is why he chose to manufacture a 'Car-plane' in the face of the hardship facing Ghanaians.”

Dr Aryeetey would not use the same words. But he makes a special appeal to the Ghanaian apostle/inventor: “With the economy reeling, and with the price of imported cars totally out of the reach of the pocket of the average Ghanaian worker, I thought the first thing a Ghanaian car inventor should be thinking of is not an advanced armoured vehicle. All these are nice; they show genius and all that, but in a Third World economy, the first thing on the Apostle’s mind should be something close to the philosophy that birthed the Volkswagen (VW) Beetle, a people’s car which the average worker with average wage can afford.”

The economics of Dr Aryeetey’s thinking is what attracted my concurrence - a business model that makes cheaply priced cars available to thousands of workers at a time. At a “workers price“, not only will the banks be willing to support workers to purchase Kantanka cars, knowing that pay-back will not cut their throat, but they (banks) would be too willing to look at Kantanka Automobile’s application for a facility to finance future expansion.

Forget that the VW Beetle was the brainchild of Adolf Hitler, the world’s best remembered dictator and mass murderer. His idea was for a small saloon capable of carrying a German family without their having to cut an arm and a leg. Its price, 990 Marks, represented 31 weeks’ pay for the average German worker in 1936, far cheaper than the Fords being made in England at the time. It made business sense, and the masses went for it, so much that in 1972 when the 15,007,034th Beetle rolled off the production line it had outstripped the Ford. In addition to reliable quality, the Beetle was affordable and fuel consumption made it even more attractive to the working class — the millions.

Beyond Dr Aryeetey’s concern, Yours Truly looks at the question of mass production. I may face a backlash but the truth ought to be faced, that by the Kantanka business model; indeed, by the very nature of car manufacture, the Apostle’s promised factory producing 120 vehicles a month is a pipe dream; that is, if his cars are really “made-in-Ghana”, not assembled from complete knock-downs manufactured in China. It simply is not possible.

My fears about mass produced cars were confirmed when I called up Professor Kwabena Frimpong-Boateng. Hear him:

“First of all, let me clear a misconception by all those who are hammering on the point that Kantanka cars are made in China and only assembled in Ghana. Question is, so what? There is no shame in that; after all, there is no car maker in the world — from Benz to name it — that manufactures every part of the car. Like an aircraft, one car has about 300 suppliers: even within the engine block, there are different companies or countries that specialise in valves, cylinders, piston rings, clutch and brakes.”

The heart repairer now Minister of State confirms my point. Unless we are in a position to manufacture and supply about 300 components of a car, Ghana cannot help Kantanka.