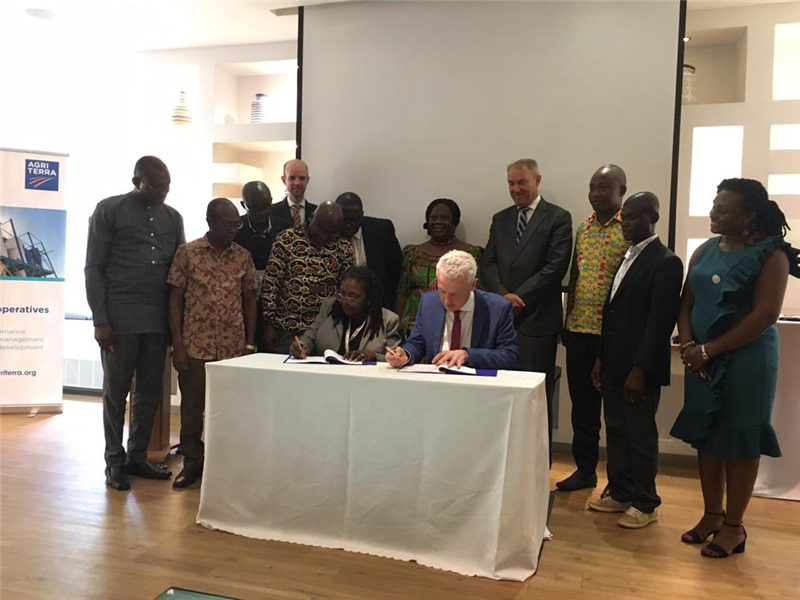 Agriterra, a Dutch-based non-governmental organisation, has officially opened an office in Ghana in a bid to support the country’s efforts to improve the livelihoods of local farmers in cooperatives who are engaged in cocoa farming, vegetable, and cashew nuts among others.

Under its operation the International NGO seeks to ensure that ambitious farmer cooperative are strengthened in governance, financial management and business development as this helps them to become professional, easily access market for their produce and stimulates rural industrialisation.

Agriterra was founded in 1997 by Dutch farmer organisations in the Netherlands but is currently working with farmers from different continents, including Latin America, Europe, Asia, and Africa.

Speaking, Thursday, in Accra at the official launch of the organisation, the Agriterra Manager in charge of Agri-advice Mr. Cees Van Rij underscored the importance of supporting farmers grouped in cooperatives.

He said that, once farmers are in cooperatives, it is not only easy for them to access the market for their produce, but it also raises their ability to borrow money from the cooperatives themselves or banks.

Cees Van Rij also noted that one of the reasons Agriterra decided to launch operations in Ghana is because the country shares a lot in common with the Kingdom of the Netherlands where the organisation has its roots.

‘’The Netherlands is a country that is known for growing a lot of Irish and Horticulture (fruits and vegetables) as well as engaging in dairy farming, which is not any different from here, so when we noticed that farmers here face the same challenges we had faced back home, we decided to come help out and we hope to do a tremendous work here,’’ he said.

The event was also attended by the Dutch Ambassador to Ghana His Excellency Ron Strikker who thanked Agriterra for having finally opened its doors in the country and promised to keep working closely with the organisation as all its efforts were for the benefit of the Ghanaian farmers and the country at large.

‘’I want to thank Agriterra for having decided to open its doors in the country after having worked previously under various bodies and done such a commendable job. It is my pleasure to inform all of you that Agriterra is here and here to stay,’’ he said.

Mr. Willem Paulus, Agriterra’s country director expressed his delight at the coming of age of the organisation has worked with various entities in the country but has now become independent.

He noted that the organisation is going to strengthen farmer cooperatives through advice, training and exchange visits where farmers will acquire skills leading them to become true business enterprises. Such skills would also include good agricultural practices and access to quality seeds as failure to acquire quality seeds has made farmers get poor yields.

At the event, there was the signing of Memorandum Of Understanding (MOU) between Agriterra and ministry of Employment and Labour Relations to deepen the relationship between the two countries.

In a speech read on the Minister of employment and labour relations noted that he was optimistic that the launch of Agriterra is going to greatly help local farmers.

The speech also indicated that the Ministry of employment and labour relations has outlined several initiatives to improve local farmers, adding that, the Ministry has submitted a new cooperative Bill to Attorney General for the necessary procedures leading to its passage.