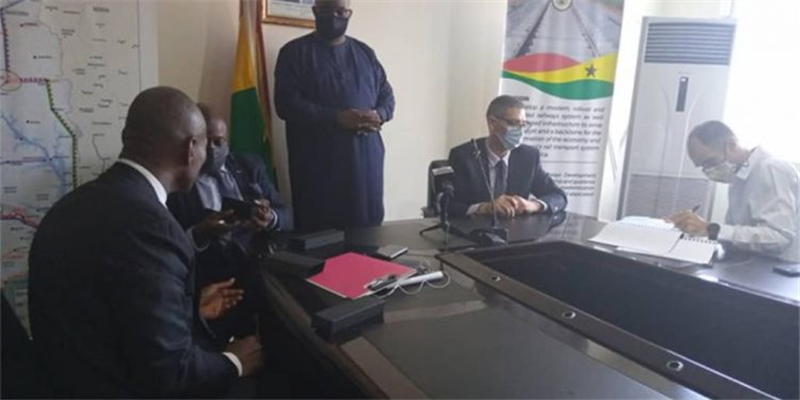 Ghana’s railway sector is set to witness a major transformation after the signing of a 500-million-dollar agreement between the Ghana Railways Development Authority and Amandi Holdings Ltd.

The project will see the construction of sections of the Western Railway Line (Standard Gauge Line) between Takoradi Port and Huni Valley, forming a total of 102 kilometers of continuous single-track railway line.

The project is expected to last for 42 months after commencement in October, 2020.

Speaking at the signing ceremony, the Minister for Railway Development, Joe Ghartey, touted the benefits of the project towards the improvement of the country’s rail network.“The impact is that, since 2012 when that construction was done, we are now connecting the railway line to the Port. That’s the first thing so the goods can move straight to the ports. Thanks be to God. The same company, Amani, is also involved in the port work so they will work with themselves so to speak, to make sure that we are doing 8 km within the ports. Next, as I said we are converting some of the narrow ports that we have to standard gates. The section between Kojokrom and Eshiem, we are creating a bypass,” he said.

He also stated that a provisional amount has been earmarked for the Employer’s and Engineer’s Cost and supervision facilities, including land acquisition and payment for affected people, payable by the Employer.

The Minister stated that from 2012 to 2017, a narrow-gauge line of approximately 15km was constructed from Sekondi to Takoradi.

“Even though its construction commenced in 2012 and was completed in 2017, barely three years ago, they have to convert it to standard gauge in line with the policy that all new constructions of railway would be standard gauge,” he added.

He said the conversion of Kojokrom to Takoradi Station section of the line would be done under this contract.

The Western Rail Line runs from the Takoradi Port to Kumasi with a branch line from Dunkwa to Awaso. It is a total of 339 kilometers.

Its preferred mode of transportation is by rail, and it is the inefficiency of the existing narrow-gauge rail line, which compels it to use road, in addition to rail to transport manganese to the Takoradi Port.

There is a bauxite mine at Awaso, 239 kms from Takoradi. This mine has used the rail network in the past, but it currently transports all its bauxite by road to the port of Takoradi because the rail line between Awaso and Nsuta, near Tarkwa, cannot be used.