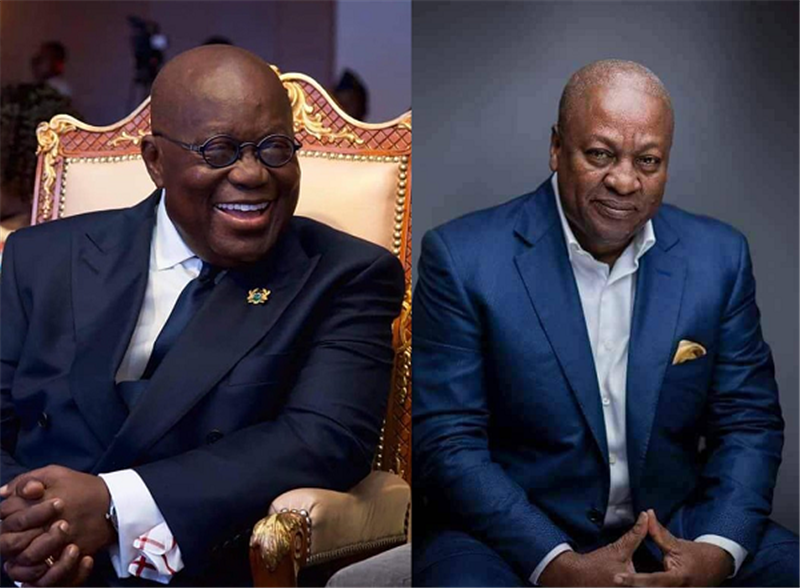 A survey by the Political Science Department of the University of Ghana (UG) has predicted a one touch victory for President Nana Addo Dankwa Akufo-Addo in the December 7, 2020 presidential election.

The survey covered 100 constituencies carefully selected across all 16 regions with 11,949 respondents out of a targeted 12,000 in a random sampling manner.

It said President Akufo-Addo will win with a 51.7 percent lead if the elections were to be held today.

The presidential candidate of the major opposition National Democratic Congress (NDC), John Dramani Mahama is expected to follow with 40.4 percent of the votes cast.

The candidate of the Ghana Union Movement (GUM), Christian Kwabena Andrews, placed third in the survey.

The survey which was carried out between November 12 to 22 this year was presented by Kaakyire Duku Frempong, a lead researcher on the project in Accra on Thursday, November 26, 2020.

It said 80 percent of the respondents said they will vote based on the campaign message.

The survey report said about 3.7 percent of Ghanaians are still undecided.

“The respondents who said they were going to vote based on sound campaign message, their preferred choices were NPP’s Akufo-Addo 52.5 and followed by the NDC’s John Mahama 40.9. GUM’s Christian Kwabena Andrews got 1.3 but what is more important is that 3.7 percent of Ghanaians have not decided.”

In 2016, the UG Political Science Department carried out a similar survey and predicted an Akufo-Addo win.

The survey in 2016, conducted in 24 swing constituencies in the swing regions of the Greater Accra, Central, Western and Brong Ahafo, as well as the NDC stronghold in the Northern Region, from the beginning of August 2016 to November 10, 2016, gave the NPP 49.4 per cent, as against 39.6 per cent for the NDC at the national level.

The study added that if the NPP was able to mobilise its core supporters to cast their votes, the party had the chance of winning in the first round. But if the NDC and the Progressive People's Party (PPP) made some gains nationally, that would force the elections into the second round, but the NPP would still be in the lead in first round and also likely to win the second round.