Election Of Speaker For The 8th Parliament: The Fight, Drama, Military Invasion And The Anti-Climax 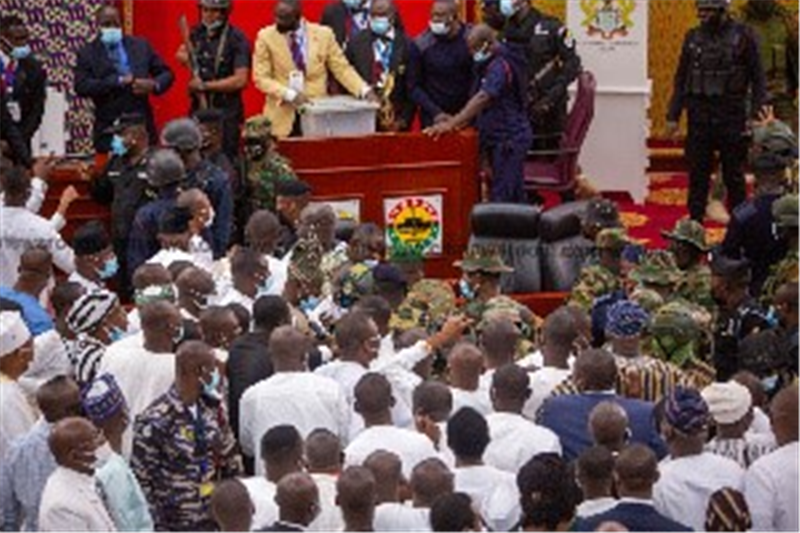 The composition of the 8th Parliament of Ghana was full of drama unseen before in the Parliamentary history of Ghana.

Aside from the usual heckling which was expected from both sides of the house, punches were thrown, polling booths were kicked asunder and ballot papers were snatched.

Prior to the dissolution of the 7th Parliament on Wednesday, January 6, the NDC MPs-elect donned white attire and came in first to occupy the seat on the right-hand side of the Speaker, reserved for the Majority. Fact: there is no Majority party since both NPP and NDC have 137 seats each, and there is one Independent MP.

The NDC MPs-elect prior to taking their seats at the Majority side were seen removing the placeholders indicating the names of the NPP MPs of the 7th Parliament who occupied that side of the chamber.

Some leading Members NPP MPs-elect such as K. T. Hammond (NPP-Adansi Asokwa), Ambrose Dery (NPP- Nandom) and Dominic Nitiwul (NPP- Bimbilla), tried to persuade their colleagues from the NDC side to occupy the Minority side of the house but for about twenty minutes, the NDC insisted on sitting at the Majority side.

This, Alhaji ABA Fuseini (NDC- Savelugu), explained was the NDC MPs-elect taking their rightful position as the Majority in the 8th Parliament.

“There is no matter to resolve. We have not violated any sitting arrangement. The good people of this country voted for change so our status has been transformed from minority to majority so we are taking our rightful place. We don’t have to wait for anyone to tell us where to sit” he said.

But Frank Annor Dompreh, the NPP Chief Whip in Parliament berated the NDC MPs for the move: “It's an invitation to a confrontational exchange because it's unnecessary. They want to create a bad impression for people to fall for it that they are in the majority. I’m surprised that Haruna Iddrisu is leading this. When I walked into the chamber, he was the first person I went to and he couldn’t give any tangible reason why they did what they did," the MP stated.

There was another standoff on the floor of Parliament by some of the MPs-elect around 11.20 pm before proceedings began. These elected members included Ursula Owusu-Ekuful, Mohammed Muntaka Mubarak, A.B.A. Fuseini and John Abdulai Jinapor.

Ursula Owusu-Ekuful, got into a heated altercation with the NDC MPs immediately when she entered the chamber.

She was later seen sitting comfortably on the laps of Kwabena Mintah Akandoh (NDC-Juaboso) with her arms folded.

Akandoh later told Joy News in a report monitored by GhanaWeb: “When the NPP MPs came in, they saw that we were on the right side so they went to the left but Ursula refused. Cletus Avoka was sitting down and decided to go to the washroom. By the time he came back, Ursula had taken his seat. We tried to persuade her but she declined. She also left the seat and I sat on it. When she came (sic) she just sat on my lap. She didn’t say anything to me, she just sat and I didn’t say anything.”

James Gyakye Quayson’s legitimacy as MP-elect for Assin North was challenged by Alexander Afenyo Markin, the MP for Effutu.

This again threw the House in a state of disarray when the Effutu MP reminded Cyril Kwabena Oteng Nsiah, the Clerk to Parliament, of the consequences of Quayson claiming to be MP-elect despite a High Court injunction.

Haruna Iddrisu, MP-elect for Tamale South responded: “Mr Chairman, courts don’t determine an elected person in Ghana. The court has the mandate to adjudicate on matters brought before it but the election of Member of Parliament is vested in Ghanaian citizens. We are aware that James Gyakye Quayson of Assin North was duly elected. As far as we know, no court processes have been served on him personally. That is why he is here having registered and having been recognized as a member of the 275 MPs.”

In an attempt to prevent the MP from taking part in the voting for the Speaker of Parliament, the Clerk stated: “I was duly served and therefore, I do not recognise James Gyakye Quayson for the election of the Speaker.”

Upon further probing, the Clerk read a supposed court injunction which he said was served and signed by one Hamza.

Here Dominic Ayine (NDC-Bolgatanga) demanded the full name of the said Hamza, but the Clerk failed to state the full name.

Ayine then reminded the Clerk that Hamza was the High Court Registrar and that due process demanded that bailiffs serve court documents on interested parties and not the registrar.

When the NDC leadership pressed further, the Clerk produced a received and dispatch book that indicated that the Clerk had received an injunction from the Cape Coast High Court.

The NDC further argued that it was not the place of the Clerk to attempt serving the MP-elect court papers whilst the said MP-elect was sitting in Parliament; that the Clerk could not act as a bailiff.

The Clerk to Parliament in an attempt to avoid further escalation, and having listened to both sides of the house, eventually told the MPs that he had decided to let James Quayson cast a ballot with the legal consequences being entirely on Quayson only as per the Constitution and the Standing Orders of Parliament.

The voting of the Speaker of Parliament was another dramatic scene coupled with some fights on the floor of the house.

Just when everything seemed calm and voting was about to begin, another chaos erupted in Parliament with Muntaka Mubarak (NDC-Asawase) directing a punch at Dr. Nana Ayew Afriyie (NPP-Effiduase Asokore).

Muntaka, who is the NDC’s Chief Whip subsequently lifted the ballot box and positioned it somewhere else from its initial position.

The disagreement was over how the ballots should be cast. Mohammed-Mubarak Muntaka, was advocating for secret ballots in line with the Standing Orders of Parliament while the NPP wanted their Chief Whips to inspect each ballot before it was placed inside the ballot box.

This marked another setback for the process that had been marred by confusion right from the word go.

Parliamentary security were assaulted near the ballot box by some MPs with still other MPs kicking down the voting booths in the process.

On yet another occasion, when the MPs-elect were about to start casting their ballots to elect the Speaker, Mohammed-Mubarak Muntaka (NDC-Asawase) and John Abdulai Jinapor (NDC-Yapei-Kusawgu) were seen rushing towards the voting booth and ballot box and removing them from their places.

The Marshall of Parliament was, however, able to lift the ballot box to safety. However, John Jinapor (NDC-Yapei-Kusawgu) kicked the paper-box voting booth, thereby disassembling it.

Jinapor’s action was in protest at how some NPP MPs were breaching the ‘secret ballot’ protocol at a time when voting had started.

Immediately the armed military men stormed the chamber, the MPs-elect started singing the Ghana National Anthem with a repetition of the last sentence of the first stanza “And help us to resist oppressors’ rule, with all our will and might for evermore.”

“The chamber is a representative of the people...how can you bring the military to the chamber?” the NDC MPs were heard yelling.

The voting process is in accordance with Article 104 (4) of the 1992 Constitution and Standing Order 9 (1) which demands that the election of the Speaker shall be done by secret ballot where more than one candidate is nominated.

The anti-climax of the whole event was when Carlos Kingsley Ahenkorah (NPP- Tema West) snatched some ballot papers from the Clerks-at-table and bolted with them after the counting of votes for Professor Aaron Mike Oquaye was done.

Prior to the snatching of the ballot papers, the NDC members were singing and jubilating that their Speaker-nominee Alban Bagbin had won the secret ballots, and the NPP side were quiet.

Ahenkorah was chased by Mohammed-Mubarak Muntaka who accosted him and retrieved the ballot papers, assisted by the Marshall Department.

In the end, it was decided by the leadership that Alban Bagbin should be nominated and seconded unopposed.

The Clerk, therefore, called for nominations and only Bagbin was nominated. The voting process was thus abandoned at about 8:30 am, when more than eight hours had been wasted.

The Speaker-Elect was sworn into office by the His Lordship Anin Yeboah, the Chief Justice.