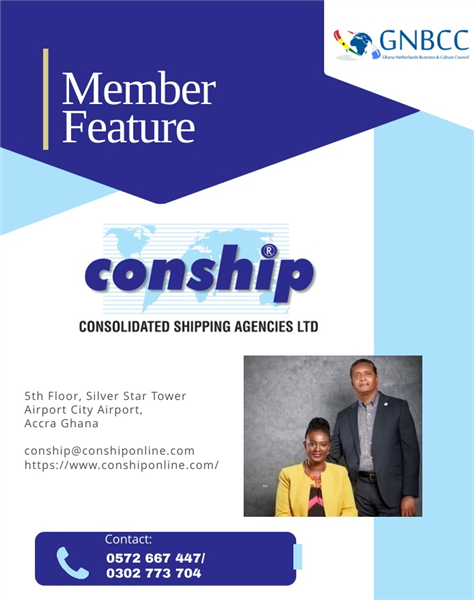 After his younger brother joined him in secondary school, the pressure was enormous on a single mother who had taken the responsibility to take care of three (3) boys. At the time, he was in form 5 and had just a year or two to wrap up his secondary school education but he gave it all up and travelled to Nigeria to seek greener pastures.

That trip was not a success, so he came back to join his mother in Tema to ‘hustle’ and make ends meet at the Tema Port. Little did he know that his work as a tally clerk at the Tema Port was going to be the foundation that he needed to build a solid business which now feeds over 200 people directly and provides livelihoods to many.

His hustle as a tally clerk gave him some insight into the freight forwarding and clearing business and that pushed him to start a similar venture in 1996; that has today metamorphosed into Consolidated Shipping Agencies Ltd. (Conship), a worldwide Shipping, Logistics and freight forwarding business.

Twenty-five years on, the Founder and Chief Executive Officer of Conship, Macdonald Vasnani (MC) looks back and attributes the success of this company to the passion to do what is right no matter the cost; “One of my go-to phrases that I have and everyone in the company knows is that “do the right thing and do it right the first time”. This leads to integrity. Integrity is priceless. Humility, integrity, care and passion is what has been the main drivers of this company since it started,” he said.

Even though it started in a small office in Tema, from day one, Mr. Vasnani was eyeing the global market-leading the company to take a bold step to change its local auditing firm to an international one (Deloitte); “We went to Deloitte at a time we were not making much but it was the urge to get things done right that pushed the company there. After a six (6) week audit conducted by Deloitte, the Company had to invest in systems and other recommendations made by the audit firm; “I can say that played a key role in the top transparency, compliance and governance system that we have today,” Mr Vasnani added.

In all his challenges, he pursued education to the highest level and is now a product of the University of Glamorgan and University of Chicago Booth School

M.C and Linda Vasnani share the CEO and COO position of Conship respectively. The two got married in 1999 after they had dated for a year.  After marriage, Linda forfeited a well-paying multinational job to join her husband’s company that had started barely three years and was still in its teething stage.

“It was not an easy decision but one that I would take again and again. I have no regrets, especially when your boss is a visionary” Linda Vasnani told the paper.

Mr. Vasnani said he never regretted convincing his wife to join him run Conship as there was no better person to believe in a dream than your better half. He disclosed that while handling a clearing job for M/S Regimanuel Gray Limited, he chanced on a meeting between the Mr. and Mrs. Botwe of Regimanuel Gray fame who are Co-partners in founding the enviable real estate company and aspired to do the same.

“I went to their office one time and they were sitting face to face at a business meeting in their corporate office and I was very impressed. It gave me the confidence that it was possible to run a successful business with your spouse. But who else can you trust, for better for worse, till death do you part. I owe my wife and my family a lot,” Mr. Vasnani mused.

He intimated that even though none of his children currently work with the company, it would be his joy to have them join Conship in his lifetime, however, a succession plan has been created to ensure that the company lives beyond generations.

Over the years, Conship diversified its operations into other areas of the logistics industry, such as Airfreight, Marine and Husbandry, Logistics and Projects.

The discovery of oil in commercial quantities in the Western Region (Offshore) of Ghana brought with its enormous opportunities for the Logistics and Supply Chain Industry. But even before then, the company had had some stint in the oil and gas sector.

The company after its first Foreign Corrupt Practices Act (FCPA) due diligence in 1999 landed its first oil and gas logistics business out of Houston with Global Offshore. Global Offshore was doing some work in Nigeria supporting some oil and gas pipeline operations and projects.

Between 2003 and 2007, Conship was actively involved in the West African Gas Pipeline [WAGP] project. The company worked with WAGP and Chevron in the pipe coating plant, handling the barges and giving offshore support.

During this period, the company further enhanced its systems and intensified training of staff in the following areas: Human Resource, Information Technology Health, Safety, Security and Environment, Transportation Systems, Compliance and ISO Certifications

These major milestones for the company prepared it to represent some multinational freight forwarding companies around the world who believed and trusted the operations of the company – pushing its activities into the limelight.

“Another milestone we are proud of was when the first FPSO, Kwame Nkrumah, came to Ghana. We handled the inward clearance, and we were one of the first companies that had to work with the off-takers offshore. During the gas project, for instance, we also had a lot of PSVs [platform supply vessels] we were working with.

Conship was awarded a contract by Tullow for domestic freight forwarding in 2010 after a successful tender – the first indigenous company to be awarded such a project. We were also actively involved from end to end in the second FPSO from Tullow and MODEC. We were awarded the contract to bring the FPSO from Singapore, and we took stakeholders to Singapore to ensure compliance and certifications.

Clearance was achieved within three hours because it was a seamless, well-planned process. We are also one of the first indigenous company to set up an Onshore Logistics Base in Ghana to support projects in Liberia (drilling campaign) back in 2012. We were awarded the contract to handle the logistics (moving materials and equipment) to Liberia from Takoradi and vice versa. After the Liberia campaign, we replicated the same module for campaigns in Sierra Leone and Walvis Bay, Namibia” Mr. Vasnani said.

This year, Conship was part of the team that executed the Tema LNG regasification terminal. As a result of its rich experience in handling these kinds of assets, Conship handled the inward clearance of Floating Regasification Unit.

Over the years, M. C. Vasnani and the company have received numerous awards, both local and international and he attributes all that to the hard-working team in the company and His Maker.

One of the major challenges Mr. Vasnani noted was a human resource. According to him, the industry needs well trained and qualified people to man affairs.

Finance has also been a challenge the company has and is still facing.  He noted that there are more opportunities in the sector but many banks are not interested in project banking and would want to get collateral on every loan they offer making it difficult to get funds to inject into operations. “This makes it difficult to compete with multinationals who can access cheap funds from their home country” he indicated.

Conship would be diversifying its operations and as a result, it is moving a bit away from some of its major operations and developing new grounds. Oil and Gas which constituted some 60 percent of its operation has been reduced due to the current global pandemic, and while the company is working hard to cement its footprints in other sectors such as, – Mining, Pharmacy, Telcom, Supply Chain, Third-Party Logistics services among others “we are hopeful of the future”.

The company is also looking at enhancing its cloud-based software’s as well, it is also looking into other developed enhanced software to ease operations in the sector; all in the bid to automate its services.

But in areas that would be difficult to automate, there is a conscious effort to give more attention to ensure that clients are satisfied and are not unduly delayed.

“We are in extraordinary times which call for extraordinary measures, and this must be done carefully, well calculated to ensure the needed targets are attained. Health and Safety has become part of us now, and we all have to embrace it and move forward”

The ultimate aim is to make the customer, clients, partners and stakeholders happy and comfortable.