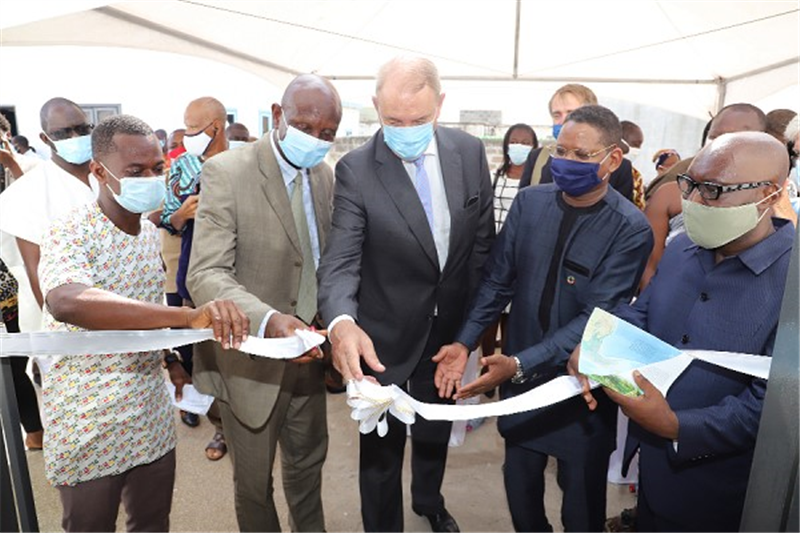 The Ghana Museums and Monuments Board (GMMB) has reopened the Ussher Fort Slavery Museum to the public, after the facility was closed down seven years ago for rehabilitation.

The museum, which was first established in 2007, with support from UNESCO, was temporarily shut down in 2014 due to infrastructural challenges.

However, the facility has now been refurbished and fitted with vestiges of slavery and other historical artefacts, with funding from the government of The Netherlands through UNESCO.

The white museum, with an aesthetic view of the sea, now houses many elements of history, including a gallery, artistic impressions of some slave trade activities, paintings and sculpture pieces depicting the history of slavery.

Speaking at the inauguration of the facility in Accra yesterday, the acting Executive Director of the GMMB, Mr Ivor Agyemang Duah, noted that the essence of the monument was to showcase slavery in a new and different light.

He said aside from the historical knowledge the museum contained, it also had an enormous touristic potential necessary for the development of the economy.

He added that “there is the tourism dimension of it because people will visit, they spend money, they will go to hotels and that will generate a lot of income for the sector and the economy as well”.

Mr Duah also indicated that the board, in partnership with the Ministry of Tourism, Culture and Creative Arts and other partners, had been engaged in many “memories restoration” over the last four weeks.

“Last week, the Volta Regional Museum in Ho was opened after three years of closure for renovation. Through the GMMB’s own IGF, a generous grant from the German Embassy, it is with a new education centre built for us by the Ghana Gas Company,” the executive director said.

In a speech read on his behalf, the Minister of Tourism, Culture and Creative Arts, Dr Ibrahim Mohammed Awal, expressed joy over the reopening of the facility and indicated that the project delayed “unexpectedly” due to project management.

He stated that although the government was in the business of bringing more tourism facilities to work, “we are mindful that we do not sacrifice heritage assets for monetary and tourism receipts. Where our heritage, natural environment in particular, could suffer damages, we will work towards its preservation”.

Dr Awal also said the National Gallery, which had been closed down for almost five years for renovation, would be opened to the public soon.

“About 80 per cent of the work has been done and I am happy to note that very soon, works will be completed and the gallery will be opened to the public,” he added.

For his part, the Ambassador of The Netherlands to Ghana, Mr Ron Strikker, who recounted the infamous trans-Atlantic slave trade, expressed the hope that Ghanaians and the Dutch would face that part of their history “squarely and “together”.

He said facing the past helped to tackle the future together, adding that “what we must do is to uphold the values that we share today, including respect for human rights and human dignity and on that basis put our hands together to better the future”.

The Ussher Fort (originally Crevecoeur Fort) was built by the Dutch in 1649 as a trade post but later became a slave dungeon which facilitated the trans-Atlantic slave trade in the Gold Coast.

The monument later became a police post in the post-colonial era, a prison for some time, served as a refugee camp for Liberian and South Sudanese refugees and is now a museum.