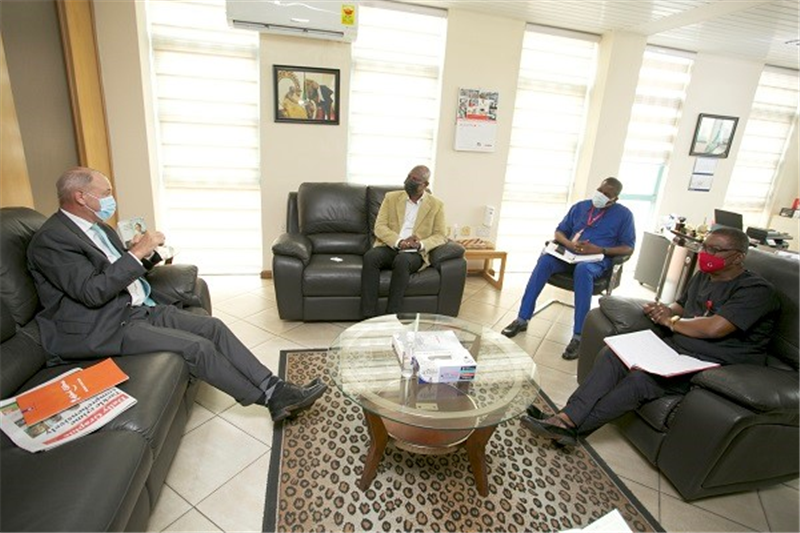 The Netherlands Ambassador to Ghana, Mr Ron Strikker, has commended the Graphic Communications Group Limited (GCGL) for its consistent reportage on issues that influence policy decision making in the country.

He said the performance of the media organisation, particularly on development journalism, was very outstanding, indicating that most of its stories were very compelling and geared towards the development of the country.

Mr Strikker said this when he paid a courtesy call on the management of the GCGL as part of his tour to familiarise himself with the operations of the media in the country.

He was in the company of the Administrative and Communication Officer of the Netherlands Embassy, Ms Gifty Baaba Bohemia DesBordes.

“There are different types of journalism but your company does that in very practical matters, particularly your report on the streetlights of the nation and encroachment of traders on pavements as well as a supplement on infrastructure which have been deserted, these were big hits and everybody talked about them,” Mr Strikker said.

He was also in full admiration of the country’s tolerance for press freedom, indicating that it was very important to ensure the development of the country.

The MD of the GCGL said the company, since its inception, had been curating the country’s contemporary history day by day.

In the course of that, truth and accuracy were the main cardinal points on which it stood on.

“We cannot go out in a rush in our reportage like other media houses because we want to be the first to break it. Our cardinal principles in reporting is truthfulness and accuracy so that anybody who picks up any of our newspapers is assured that whatever it is that they are reading is the truth,” he said.

Particularly, as the country was still in its developing stage with a very young population, Mr Afful said educating every day was key principle of its brand newspapers.

He also noted that the current generation was digital oriented and as a result, the newspaper was not the first port of call in terms of news searching.

In that regard, he said, the company had also migrated to the digital space to ensure it continued to stay afloat.

However, in spite of such migration, he said, the company did not compromise on its key principles in news reporting.

In that frame, Mr Afful said, the company had adopted a strategy to first report the news on its digital space followed by a more detailed reportage in its newspapers.

Conscience of the nation

For his part, the Editor of the Daily Graphic pointed out that the company regarded itself as the conscience of the nation.

In that direction, he said, it needed to showcase where the country should be heading to.

“So in selecting our editorials, we want to consider what sort of impact it offers the nation. Our topics are always deliberate that aim at influencing policy decisions as well as making sure it benefits the ordinary person,” he said.

He further noted that investigative reporting was very critical for the growth of any media institution.

In that regard, he said, the company had toyed with that aspect of news reporting but had challenges going after the “high hanging fruits”.

That, he explained, was as a result of high cost of funding and the time it demanded to complete such stories.

“But all the same, it’s not an area that we can avoid and, therefore, we are focusing on the low hanging fruits which is development journalism,” he said.