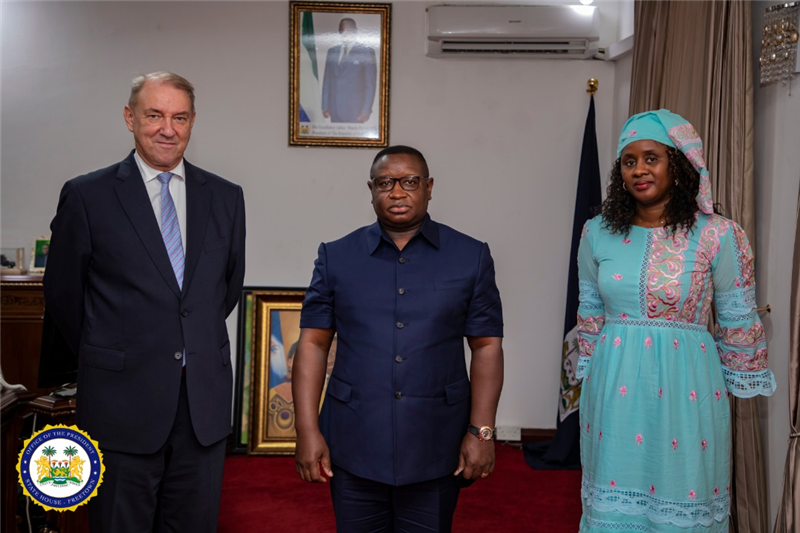 State House, Freetown, Tuesday 13 July 2021 – Ambassador of Kingdom of the Netherlands to Ghana and accredited to Togo and Sierra Leone, Ronald Gerald Strikker, has called on His Excellency President Dr Julius Maada Bio to bid farewell after the end of his tour of duty this year.

Ambassador Strikker thanked President Bio and the people of Sierra Leone for their hospitality during his two separate visits to the country, noting that in 2018 he had discussions with the President on how to deepen bilateral relations between the two countries.

“Your Excellency, thank you very much for the beautiful moments during my visits to your beautiful country. This cooperation between our two countries will surely continue,” he assured.

In his remarks, President Julius Maada Bio thanked the outgoing Ambassador for the many moments shared in great partnership, adding that he hoped that his successor would be able to continue the good relationship already established.

The President further stated that the Netherlands had helped Sierra Leone a lot in terms of providing postgraduate scholarships to Sierra Leoneans and expressed hope that the incoming Ambassador would continue on that path.

“As a government that focuses on Human Capital Development, we pay fees for school going children in all government and government-assisted schools. There is still a challenge with the payment of fees for undergraduate and postgraduate studies. I hope the gesture from the Netherlands in supporting education, which aligns very well with our educational priority, will continue,” he stated.

President Bio concluded by saying that he would love to advance the bilateral cooperation in the agriculture sector, adding that the Netherlands was doing very well in agriculture and food processing.

“It is a pity to see you go, but you have to. You have served us well. So, on behalf of the government and the people of Sierra Leone, I want to say thank you and goodbye,” he concluded.