Ghana: Freight Rates for Cocoa Shipment Up By 5 Percent 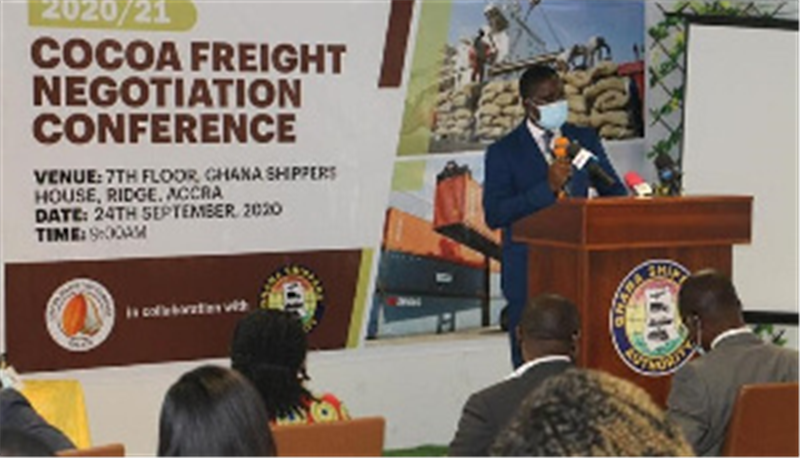 The Cocoa Marketing Company (CMC), Ghana Shippers Authority (GSA), and the shipping lines ferrying Ghana's cocoa exports to the international market have agreed to increase cocoa freight charges by five percent for the 2021/2022 cocoa season, which starts on October 1.

This was after a lengthy negotiation with the 26 shipping lines ferrying the country's cocoa exports at the cocoa freight negotiation conference in Accra on September 10.

The bunker adjustment factor (BAF), an additional charge levied on the shippers to compensate for fluctuations in the price of the ship's fuel, was also increased by one percent that is from 27 percent to 28 percent for all destinations but for the Far East and Brazil which had already been added to the freight rate.

"After very lengthy discussions with the 26 shipping lines which participated in this year's cocoa freight negotiations and upon consideration of the following issues raised relating predominately to current events in the global shipping market - increasing charter rate, container shortage, rising bunker prices. With the need to keep a competitive freight rate for Ghana's cocoa, especially in the light of competition from neighbouring countries, some conclusions have been reached. Based on the foregoing, the freight rate for the shipment of cocoa beans from Ghana for the 2021-2022 cocoa season has been concluded as follows: Basic freight - 5 percent increase, bunker adjustment factor (BAF) - 1 percent increase," she said.

Ms Bismarck also noted that with the new conditions agreed on, the shipping lines were to supply dressing materials, position empty containers at the cocoa stuffing areas and bear lift on and lift off cost.

"The obligations of the shipping lines in the shipment of cocoa which was an agreement for the acceptance by CMC of a change in shipment terms from LCLFLC to FCLFCL shall be maintained. Supply of dressing materials, positioning of empty containers at the cocoa stuffing areas, bare lift on - lift off cost.

The obligations of CMC in the shipment of cocoa which is an agreement for its acceptance of a change form LCLFCL to FCL shipment terms shall also be maintained as follows. Dressing and stuffing of containers, Delivery of full boxes to named places or terminal, Fumigation of empty and leading containers," she added.