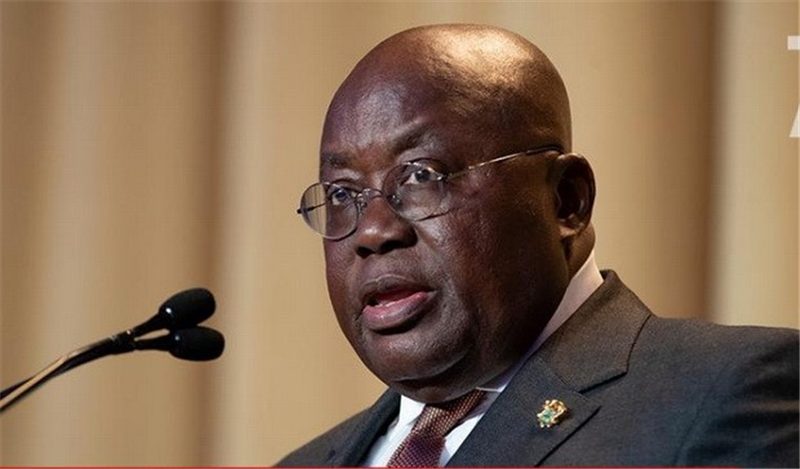 He said opposing views should be given recognition. The bill, titled, "The Promotion of Proper Human Sexual Rights and Ghanaian Family Values Bill 2021", was submitted to Parliament in June, this year.

Speaking for the first time on the bill since it was introduced to Parliament, the President said it would be a credit to the country’s democracy if the issue was handled rightly.

President Akufo-Addo made the call when he granted an interview to Peace FM in Accra yesterday at the start of his three-day working tour of the Greater Accra Region.

He told the host, Kwami Sefa-Kayi that he was impressed with the ongoing discussions on the anti-homosexuality bill.

The bill, among others, seeks to make it a crime to be LGBTQ+, or to advocate LGBTQ+ rights. Offenders could face jail terms.

However, the submission of the bill to Parliament had elicited a major public debate over its appropriateness.

Many religious organisations and like-minded institutions and individuals have expressed their full support for the bill to be passed into law while some civil society organisations (CSOs) and other campaigners had opposed it with the explanation that it would infringe on the human rights of LGBTQ+ people in the country, and subject them to persecution and violence.

Answering specific questions on the vexed issue of homosexuality in the country vis-a-vis the bill before Parliament, President Akufo-Addo said he recognised the fact that the matter bordered on public opinion that was going through a legitimate process.

“What I will hope for is that the debate would be civil and that we will recognise the need for us to be tolerant with each other and with opposing views,” he stated.

The President indicated that it was the first time the Private Members Bill introduced in Parliament was being used to sponsor the bill.

Asked if he felt pressured by the ongoing debate, President Akufo-Addo said he could not feel pressured.

He indicated that he was impressed by the proliferation of ideas including people in civil society sectors who had expressed their views on the matter.

While welcoming the fact that over 130 memoranda had been submitted to the Parliamentary Committee on Constitutional, Legal and Parliamentary Affairs, he anticipated that the committee would look at it closely before they could come to some consensus.

President Akufo-Addo said the chairman of the committee had spoken about his preoccupations, and added that the chairman’s position was very legitimate.

He explained that all that was happening were “part of the mix”, and therefore, expressed the hope that the process would be conducted in a respectable manner.

He said at the end of the day, Ghanaians would know the direction Parliament would take the matter to.

Dismissing assertions of his political opponents that he had turned into “ a clearing agent” by exonerating officials of his administration of corruption allegations, the President said investigations into allegations of corruption were conducted by appropriate state institutions and not him.

”These are the institutions that carry out these investigations and then produce a report and it is on the basis of the report that I act,” he stated.

Answering questions on the Office of the Special Prosecutor (OSP), the President said the government was committed to resourcing the office to fight corruption.
He said the new Special Prosecutor, Mr Kissi Agyebeng, was receiving the necessary resources that would enable him to undertake his work.

Responding to questions on the Ghana School of Law admission saga, President Akufo-Addo said it was an unfortunate situation especially as the problem had persisted for some time.

“It’s unfortunate, I can’t pretend that this is a happy coincidence for me at all, on the contrary, I’m very disturbed by it, and I’m hoping that soon the cooperation of the various stakeholders, the Ghana Legal Council, the Chief Justice himself, Attorney-General and myself, we’ll all find a solution to this situation,” he said.

He added that for the time being, there was no space in the School of Law for the students who passed, which was a problem.

“There are several others before them who unfortunately fell into the same pit. It may be that this group has decided to be more vocal than their predecessors,” he stated.

President Akufo-Addo said the current development provided a good moment for those matters to be resolved as keeping the gates of the school closed for students who passed was not in the best interest of the nation.

“All I can say is that God willing, by the time I come back here the next year, substantial progress will be made in trying to deal with this,” he said.
Stressing that more lawyers were needed to drive the rule of law for sustainable development, the President said: “I think that idea of more and more lawyers in the system is good for the health of the nation.”

“If we want a country that is governed by the rule of law, it means that we need to have lawyers in virtually all aspects of our national life guiding the development of our country so that the rule of law really makes sense,” he added.