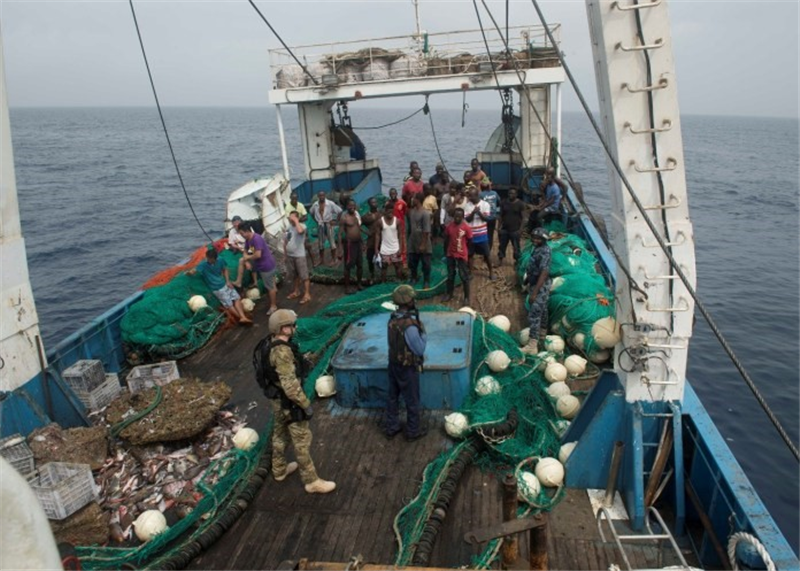 A three-month investigation based on interviews with dozens of fishery experts, company records and financial documents has revealed an opaque network of Chinese control and ownership of many industrial fishing vessels operating in Ghanaian waters – in contravention of local laws.

The Environmental Justice Foundation (EJF) – an NGO that monitors economic and environmental abuses – has blamed the depletion of Ghana’s fish stocks on over-fishing by Chinese-owned trawlers that use Ghanaian front companies to obtain fishing  licences. “Any further decline will be catastrophic and have huge socio-economic costs,” warned Steve Trent, EJF’s chief executive.

The foundation estimates that  90% of fishing vessels operating  in Ghana’s territorial waters are effectively owned by Chinese companies.

The investigation highlighted the failure of government officials in Ghana to take significant action to deal with legal violations.

In June 2021, the European Union issued a warning  to Ghana for what it described as the country’s failure to impose “effective sanctions on vessels engaging in or supporting illegal, unregulated and unreported fishing activities”.

Several years of calls for reform by  civil society actors, academics and the EU have yielded very little result, according to Francis Adam – President of the Central Region Fishermen Association. “The current minister and previous officials have not shown enough commitment to dealing with Chinese involvement in the fishing sector and the impact on local fishers,” Adam said.

The Fisheries Minister, Hawa Koomson – who is responsible for protecting fisheries in Ghana, failed to respond to several letters from the investigators seeking information or comment about findings of this investigation.

Shandong Zhonglu Oceanic Fisheries Company is a publicly traded Chinese company which revealed in its 2014 annual report that it uses a ‘special purpose vehicle’ to exercise control over a number of Ghanaian-registered companies.

The company, headed by Lu Lianxing – a member of the Communist Party of China, has its principal place of business at Qingdao in China’s Shandong province.

In its 2019 annual report, the company disclosed that it had a 100 percent stake of the following companies in Ghana: Laif Fisheries Company, Zhong Gha Foods Company and Africa Star Fisheries. It also described these companies as “significant foreign operating entities”.

A review of the Ghana’s 2021 licenced fishing vessels revealed that three of the companies owned by Shandong have obtained licences to operate five tuna vessels in the country.

Documents obtained from Ghana’s Registrar of Companies showed that Africa Star Fisheries was not registered in the country as at November 2021. Despite this, the ministry has granted it a fishing licence.

The documents also show that Shandong-registered Afko Fisheries is registered in Ghana to six entities and persons, but make no mention of Shandong itself.

LAIF Fisheries, which is also owned and controlled by Shandong, is registered and owned by two entities in Ghana:  Industrial Finance (Africa) House and Shandong Zhonglu Hiayan Ocean.

Despite several requests for comment by email and on the phone, neither Shandong nor its subsidiaries in Ghana have responded.

The investigation also showed that Ghana’s Fishery Ministry granted fishing licences to the companies listed below last year, while there was no evidence at the Registrar of Companies that they were registered.

The Principal State Attorney in the Registrar’s office, Afua Sarpong, explained that: “Any evidence of company registration documents held by these companies may be brought to the attention of the Registrar General for authentication”.

Fisheries expert Trent said section 47 of Ghana’s Fisheries Act stipulates that at least 50 percent of the beneficial ownership or control of tuna-fishing vessels must be held by the Ghanaian government, a citizen of Ghana or Ghanaian public corporation, and have its principal place of business in Ghana.

He added: “Given that the vessels appear to be operating under the flag of Ghana, if they listed as suspected as being beneficially owned in the majority by Chinese state/corporate actors … either the vessels did not declare their true beneficial ownership, or the Ministry of Fisheries and Aquaculture Development contravened the Fisheries Act by granting the vessels authorisation (to operate).

“The new 2019 Companies Act clarifies the definition of a beneficial owner, showing clearly that the way Chinese fishing corporations are using Ghanaian front-companies is illegal,” he said.

A spokesperson for the Ghana Industrial Trawlers Association, Kate Ansah, argued that trawl vessel owners in Ghana go into “hire purchase agreements with Chinese owners”. However, she insisted that the Ghanaian-registered tuna companies are allowed to go into partnerships.

Kofi Agbogah, a fisheries expert and director of coastal governance NGO Hen Mpoano, said Ghanaian subsidiary companies acquire licences directly from the Ministry of Fisheries “through opaque and phony arrangements”, while the vessels are ‘manned (operated) by Chinese owners’. “This is illegal,” he added.

The lack of transparency that allows Chinese companies to set up opaque corporate structures and work through Ghanaian fronts to obtain licences to fish is thought to deprive Ghana of up to $23.7million a year in tax revenue.

Illegal fishing linked to opaque ownership structures also has a severe impact on Ghana’s ‘small pelagic’ fish populations, as sardinella numbers are  already on the brink of collapse – with catches crashing by 80% over the past 20 years.

Adam commented that he had worked in the fishing industry for more than three decades, but “the last decade has been most challenging due to dramatic reduction in our catches as a result of the influx of foreign vessels”.

The World Bank has estimated that incomes of artisanal fishers in West Africa have fallen by 40 percent over the past decade – plunging thousands of fishers and their dependents into abject poverty. This raises important questions about why officials at Ghana’s Ministry of Fisheries and Aquaculture have failed to take any urgent action to deal with the perpetrators and beneficiaries of these illegal practices.

The World Bank has also raised concerns about the Ghana government’s “weak commitment to reducing the industrial segment’s fishing capacity (in favour of small artisanal fishers)”, as agreed under a 2012 moratorium. The Bank noted that government is “highly influenced by forces within the industrial segment” and reiterated that “foreign-owned vessels being allowed to register in Ghana under beneficial ownership arrangements are not being investigated”.

In the past, the Ghanaian government has taken a soft stance with alleged legal violations by Chinese companies, in what is seen as a trade-off for Chinese development aid.

In 2019, government dropped the prosecution of a well-known Chinese national, Aisha Huang who was found to be openly engaged in illegal mining in the country, and opted to deport her.

A senior government minister, Yaw Osafo Maafo, explained that Huang had not faced the full rigours of the law because of huge Chinese investments in the  country.

State investment data show that the number of Chinese projects and investments in Ghana has rapidly accelerated over the past two decades. China is currently Ghana’s primary source of foreign direct investment, as well as its principal trading partner and infrastructure financier.

Michael Addaney, a Ghanaian researcher and lecturer at the Department of Planning and Sustainability at the University of Energy and Natural Resources, remarked that: “While China claims it is prioritising environmental sustainability in Africa, the extractive projects initiated by its private sector do not align with this stated goal”.

Trent complained that in a country where close to 25 percent of the population live below the poverty line, “Ghana’s valuable fisheries resources are being sold-off for negligible returns to foreign operators in breach of the law.

“The minister must immediately resolve the issue of over-capacity in Ghanaian waters, in line with scientific advice so as to counter the collapse, or near-collapse, of fish populations in the country. A red card (EU import ban) for the country is a realistic prospect should Ghana be deemed to be making insufficient progress.”

>>>Daniel Abugre Anyorigya contributed to this report. This is part of a series on environmental crime in Africa supported by the Global Initiative Against Transnational Organised Crime, the Henry Nxumalo Foundation and Oxpeckers Investigative Environmental Journalism.