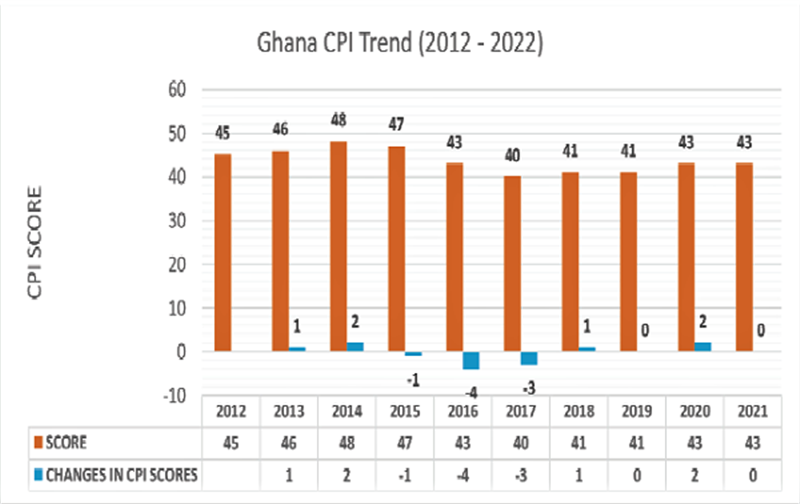 A decade’s trend analysis of Ghana’s score on the Corruption Perception Index (CPI) shows that the country is stagnating on the ranking and making no progress in the fight against corruption.

Some of the reasons Social Science researchers and political watchers have adduced are the cut-throat cost of vying for political office in the country, unregulated campaign financing, weak oversight supervision and the creeping normalisation of corruption among the citizenry, where Ghanaians openly discuss either the distribution or receipt of ‘election gifts'. Ghana’s score places it ninth, along with Senegal, out of 49 sub-Saharan African (SSA) countries on the 2021 CPI index.

At a roundtable on “Rethinking Ghana’s Anti Corruption Strategies: A Decade’s trend analysis of the Corruption Perception Index (CPI)”, participants, panellists and facilitators adduced the reasons for the stagnation on the ranking and lack of progress and called for them to be addressed.

It was organised by the Ghana Integrity Initiative (GII), the local arm of TI.

Cost Presenting a paper on the theme to set the tone for discussions, the Director of Advocacy and Policy Engagement at the Centre for Democratic Governance, Ghana (CDD-Ghana), Dr Kojo Pumpuni Asante, said a study showed that in 2018, it cost about $85,000 (about GHc500,000 million) to contest party elections.

In 2020, a review of that study showed that the amount had shot up to between GH¢2 million and GH¢5 million.

For instance, in some constituencies in the country, such as Dome/Kwabenya, constituents openly received GH¢500, television sets or fridges and life insurance cover, worth about GH¢10,000, from political party contestants. This means when the politicians come to power, they have to recoup of all such resources

Dr Asante said to make a headway in the fight, there was the need for a review of the laws regulating political campaign financing.

The National Democratic Congress NDC) Member of Parliament (MP) for South Tongu, Mr Samuel Okudzeto Ablakwa, corroborated Dr Pumpuni-Asante’s assertions and said the figures quoted were conservative. He said depending on the constituency, a candidate could spend much more.

For instance, in a constituency that was the ‘World Bank’ of a party with high stakes, a candidate was bound to spend more, while in others where the stakes were low, less, he said.

Mr Ablakwa advocated integrity on the part of public office holders, as well as a rigorous system of vetting candidates by the citizenry for them to be sure about the integrity of their duty bearers in relation to public resources.

A Deputy Attorney-General and Minister of Justice, Mr Alfred Tuah-Yeboah, stressed the commitment of the government to the fight against corruption by outlining the laws passed and other efforts in the anti-corruption campaign.

Key among the laws were the Right to Information Law, the Witness Protection Law, the Criminal Offences (Amendment) Act, 2020, which has changed corruption from a misdemeanour to a felony, and several laws pertaining to public financial administration, he said.

He said the automation of public institutions to limit human interfaces with the provision of public services in places such as the Passport Office and the Driver and Vehicle Licensing Authority (DVLA) and the establishment of the Office of the Special Prosecutor (OSP) were all part of those efforts.

Mr Tuah-Yeboah called on all Ghanaians to join hands in the fight against the vice.

The Programmes Manager of the GII, Mrs Mary A. Addah, in a presentation on Ghana’s CPI performances from 2012 to 2021, said the best score Ghana had recorded was in 2014, while the worst was in 2016 when it suffered significant losses of four points on the score between 2014 and 2016.

She described Ghana’s performance on the score as “zig-zag”.
She advocated the regularisation of discussions on the country’s performance and strategies in the anti-corruption campaign.

Welcoming participants, the Executive Director of the GII, Mrs Linda Ofori Kwafo, expressed dissatisfaction with Ghana’s performances, saying that in spite of all the effort, no progress seemed to be made.

She said to make a meaningful headway in the fight against corruption and its devastating effects on the country, there was the need to drum home, in practical terms, “what Ghana loses through corruption and what benefits we stand to gain in order to appreciate the urgency of the problem”.

She said studies showed that Ghana lost more than $1 billion in illicit financial flows, including transfer pricing, the under-valuing of imports and over-valuing of exports, among several other trade and financial malpractices.

Mrs Ofori-Kwafo said if Ghana could stop that leakage, it would not be necessary to go to the International Monetary Fund (IMF) or the World Bank to borrow.

She said the losses of billions through misappropriations captured in the Auditor General’s Report yearly were also mind-boggling.

Mrs Ofori-Kwafo said it was common knowledge that corruption held back economic growth, increased the cost of doing business, reduced revenue to the state, led to capital flight and inflated the cost of running a government.

“It also results in the loss of legitimacy and respect for legally constituted authorities,” she added.

The Executive Director of the GII said all governments had come to power with the pledge of fighting corruption, and yet it remained a major challenge.

She said the GII had recommended gaps in Ghana’s anti-corruption drive and sent them to the relevant institutions, all to no avail.

She said the 19 countries (including Ghana) experiencing a dip in their rankings also had some loss in civil liberties and corruption correlated with human rights.

Mrs Ofori-Kwafo said action was needed to redress the situation.

“Why should the entire country suffer because a few men/women want to benefit by foul means?” was her rallying call to participants to revive themselves in the anti-corruption campaign.