Govt has no intention to seek IMF bailout - Ofori-Atta 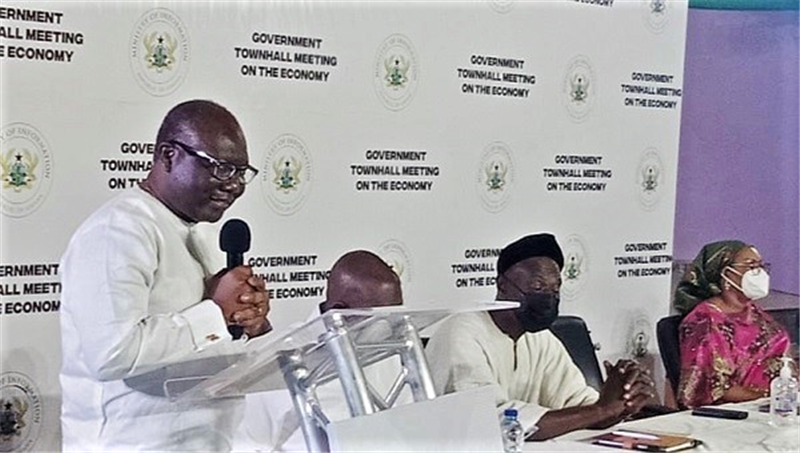 The Finance Minister, Mr Ken Ofori-Atta, has said the government has no intention to go to the International Monetary Fund (IMF) for a bailout but will resort to available means within the country to generate revenue.

He said Ghana had numerous resources, and that the government would continue to explore them and other opportunities to raise revenue for its transformation.

"We are not going to the IMF because we have all resources at our disposal to transform the country," he said.

Speaking at a town hall meeting on the Electronic Transaction Levy (E-levy) in Tamale yesterday, Mr Ofori-Atta said Ghana's future did not hinge on the E-Levy, but that the levy was a means to maximise the benefits of the electronic transaction system.

Yesterday’s town hall meeting was the third to be held, as the government seeks to build consensus and also court support for the proposed E-Levy.

The first two meetings were held in Koforidua and Takoradi, respectively.

Among government officials at yesterday’s event were the Minister of Information, Mr Kojo Oppong Nkrumah; the Northern Regional Minister,

The event also brought together representatives of civil society organisations (CSOs), political parties, traditional leaders, the clergy, hairdressers, among others.

Participants took turns to ask questions regarding the implementation of the policy.

The government representatives took time to explain the need for the levy to be embraced, the challenges that its rejection was likely to bring, as well as the steps that would be put in place to ensure accountability.

Mr Ofori-Atta said the government as part of a prudent fiscal consolidation move said it was committed to cutting down expenditure across board by 20 per cent.

The Minister of Finance said the government’s decision to rationalise expenditure by about 20 per cent was to decisively strengthen fiscal consolidation of the 2022 budget to address critical concerns of the economy, create jobs for the youth, obtain a positive primary balance and stabilise debt.

He said the decision was in accordance with the Public Management Act (PFMA) and would help strengthen expenditure management, bring the deficit back within limit, make development sustainable and channel expenditure to critical sectors of the economy to increase growth and create jobs.

“We are committed like we have stated earlier to cutting down public expenditure by 20 per cent. This means that our fiscal consolidation agenda going forward is not going to be only revenue-led but also expenditure-focused.

“And through the E-Levy, government can rake in more revenue to invest in important sectors of the Ghanaian economy to the benefit of all,” Mr Ofori-Atta stated.

Mr Ofori-Atta indicated that with the changing economic trends and the evolution of electronic systems, there was the need for the government to implement an effective taxing system so that Ghana could benefit from that.

He emphasised the need for Ghanaians to leave behind emotions and political colouration and embrace policies and programmes that would inure to the benefit of all. "We have to sit down as a people and differentiate between what is good for us and what is not. If we don't change our attitude towards the way we handle national issues, we will perish," he cautioned.

He gave an assurance that structures would be put in place to ensure the money generated would be effectively utilised, saying: "Ghanaians have every right to ask for accountability, so every amount generated will be accounted for."

Mr Nkrumah, who set the tone for discussions at the meeting, asked Ghanaians to ignore the false interpretation of issues surrounding the E-Levy by a section of the public and focus on the benefits it would inure to them.

“It is about time we generated our own revenue to solve our problems as a country, rather than look elsewhere to borrow. That's why the government thinks the E-levy is one of the effective ways to internally generate revenue; obviously, borrowing is not the solution" he noted.

Mrs Koomson, for her part, chastised the opposition National Democratic Congress (NDC) for instigating the public against the E-Levy and asked them to "pass the bill and see if, indeed, it will bring hardship, as they claim".

Alhaji Shaibu charged the people of the region to rally behind the government in its quest to implement the policy to help alleviate the challenges imposed on the country by the COVID-19 pandemic.

While some participants hailed the proposed policy, describing it as an effective means to generate revenue for the country, others urged the government to consider slashing down the proposed 1.75 per cent to lessen its impact on the public.

The Northern Regional Coordinator of Mobile Money Agents, Mr Mumuni Abdul-Aziz, urged the government to reconsider its decision on the policy, as it would have a toll on their businesses.