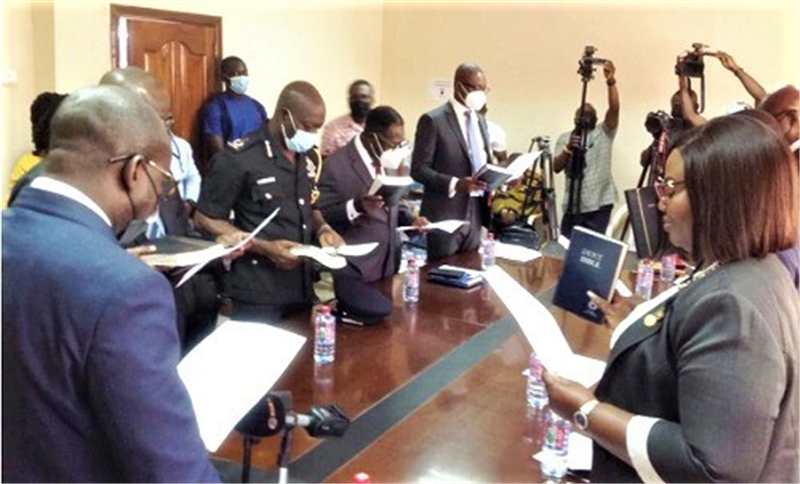 The Attorney-General (A-G) and Minister of Justice, Mr Godfred Yeboah Dame, has called on the management of the Economic and Organised Crimes Office (EOCO) to focus on investigating serious tax frauds and prosecute “big tax offenders”, including multinational companies.

He stated that it was unjustifiable for big companies and entities to under-state or hide their true income, just to evade their tax obligations to the state.

“With the evident competition of many sectors for the nation’s scarce revenue, the situation where big companies and entities, including multinational firms operating in Ghana which are required to contribute significantly to the tax revenue of the state, under-state or hide their true income in a bid to evade a satisfaction of their true obligations to the state is unjustified,” the A-G said.

Swearing in members of the new governing board of EOCO in Accra last Wednesday, Mr Dame said: “I have indicated to the management of EOCO already, that the prosecution of tax offences by big companies, including multinational firms operating in the country, will be the focus of my office this year and the years to come.”

“I expect EOCO to devise very efficient means of investigating such offences to ensure their able prosecution,” he added.

The nine-member board is chaired by Stephen Raymond Dapaa-Addo.

The Minister of Justice said EOCO was established to prevent and detect organised crime, as well as facilitate the confiscation of the proceeds of crime.

Mr Dame expressed worry over the relatively low record of money it had recovered from proceeds of crime.

“It is undesirable for perpetrators of economic crime to conceal or keep the fruits of their crimes against the people of Ghana. Such a situation breeds mistrust in the system and robs the nation of much needed revenue for the execution of lofty development projects,” the Attorney-General said.

In his view, the mandate to recover the proceeds of crime was one that placed EOCO squarely in a position to contribute to the national purse by being a major generator of revenue.

“I implore the new board to formulate policies and superintend affairs of the organisation in a manner to efficiently boost its recovery of proceeds of crime function under the law,” Mr Dame stated.

Mr Dame pointed out that he considered three mechanisms stipulated in Act 804 to be very instrumental for the attainment of the objective to recover the proceeds of crime — the search and seizure powers of EOCO under sections 24 and 25 of Act 804, the power to track properties under section 29, as well as the mandate to investigate tax fraud and prosecute same on the authority of the A-G, conferred by section 3(a)(v) of the governing act.

“The property tracking mandate of EOCO, very useful for the identification and discovery of illicit property, requires cooperation with other institutions of state and relevant foreign or international agencies.

“I trust the board to assist the office to ensure the sound attainment of this all-important function,” Mr Dame said.

On behalf of the members, Mr Dapaa-Addo assured the A-G that the board would work hard to attain the objectives set for it.

He said people were getting away with what he called “blue murder and flaunting wealth, but we do not know the tax that they are paying.”

Mr Dapaa-Addo gave an assurance that the board would work to help trace and recover illicit proceeds.

He acknowledged the fact that although the government had provided 14 vehicles for EOCO, there was the need for more vehicles and funds to enable the organisation to discharge its mandate effectively.

“On behalf of my board, I assure you that we will dedicate and devote ourselves to the service of EOCO for the period we are appointed,” the chairman said.