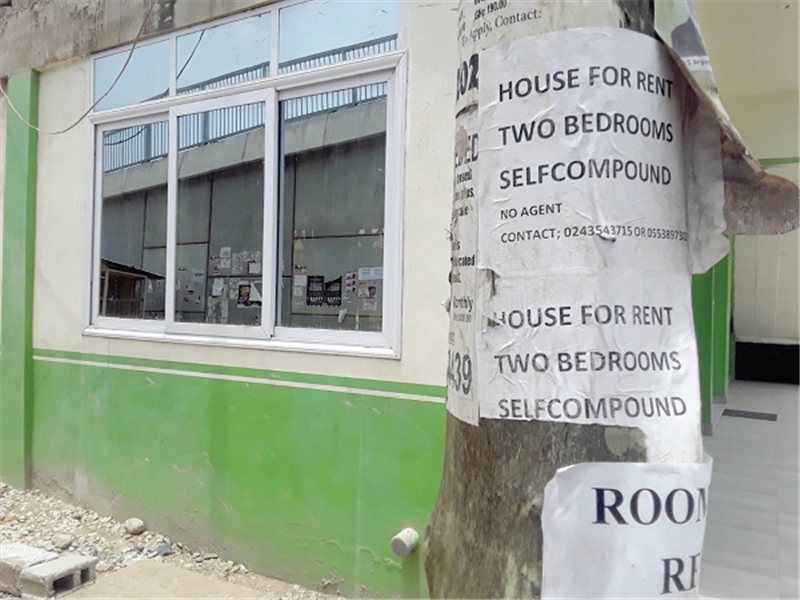 The Rent Control Department last year settled 14,586 out of the 20,221 cases reported to the department.

The cases comprised recovery of possession, rent arrears, refund of rent advance, inducement of tenants to quit and request for more time to vacate residential apartments.

The Head of Public Relations at the department, Emmanuel Hovey Kporsu, who made this known to the Daily Graphic in Accra, said between 2016 and 2021, the average settlement of cases in the industry was 83 per cent.

Mr Kporsu said the department was mandated to work cooperatively with landlords and tenants to promote optimum peaceful co-existence through education and reconciliation, while providing guidance on rent matters, in compliance with the Rent Act.

He said in spite of the laws that stipulated fees and rent advance to be collected, charges had been grossly violated by both landlords and “illegal agents”.

Interpreting Section 25, Sub-section (1c) of the Rent Act, he said the law recognised rent agents and specified the amount they were to charge after securing vacant apartments for prospective tenants.

He said under the current law, landlords were not supposed to collect more than six months rent advance, and that a landlord could give only five per cent of the money to a rent agent as commission.

“They are to collect five per cent per annum, and this does not mean the landlord can take one year advance from a tenant and then give five per cent of that to the rent agent,” the officer said.

He said if the tenant was staying in the house for the next five years, the landlord was not supposed to pay another commission to the rent agent after a maximum of one year.

“So the 10 per cent rent agents charge per tenant and then go to the landlord to collect another 10 per cent is illegal and offensive under the Rent Act; if found guilty by a magistrate court, a person can go to jail for a maximum of two years or be fined GH¢10,000 maximum,” he said.

Mr Kporsu, however, said the Rent Act was being reviewed to regularise the activities of rent agents, as well as reinforce what landlords could and could not do to help address contemporary issues facing tenants and home owners, particularly the charging of unapproved fees by agents.

In line with that, he said, the department would be digitalised to make it more efficient to monitor the activities of rent agents.

“When we are fully digitalised and a Real Estate Agency Governing Board is also established, we will integrate our systems to enable prospective tenants check the credibility of agents on a website to be developed," he added.

He mentioned the challenges facing the sector to include the lack of vehicles to conduct routine inspections, computers and accessories.

Currently, the department has presence in 14 out of the 16 regions, with the exception of the North East and the Savannah regions.

When contacted, a founder member of the Ghana Association of Real Estate Brokers, Christian Abbosey, said the association, which was established in 2016 with a membership of 200, was aware of the illegal activities of these “roadside rent agents".