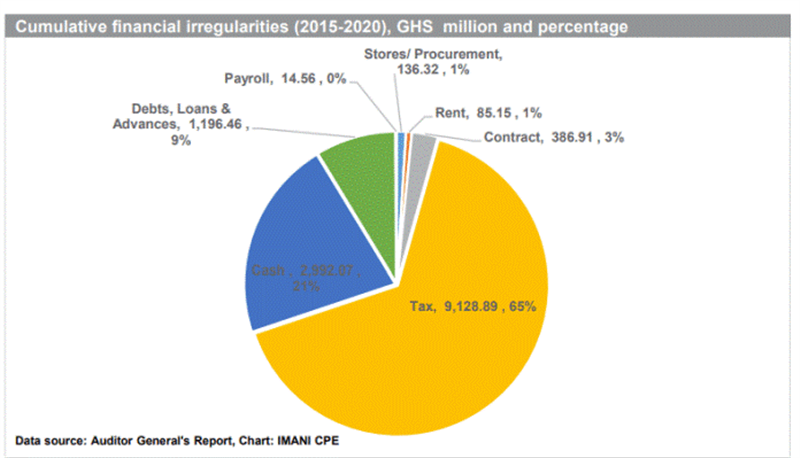 The nation lost in excess of GH¢13.9billion to financial irregularities by its Ministries, Departments and Agencies (MDAs) between 2015 and 2020, a recently-released Fiscal Recklessness Index report by Imani Africa has revealed.

The report, the second of its kind, analysed data contained in the Auditor General’s report of the state institutions and showed that despite the implementation of numerous purportedly improving public financial management (PFM) strategies and programmes in the country – the most recent being the Public Financial Management Reform Project (2015 – 2020) – financial mismanagement had worsened progressively.

“Compared to the GH¢1.42billion combined irregularities of MDAs between 2010 and 2014, the financial cost of MDAs’ fiscal indiscipline increased more than thirteen times between 2015 and 2020,” the report read in part.

Cumulatively, the total financial discrepancies amounted to approximately 3.64 percent of the Gross Domestic Product (GDP) for 2020 and an average of 0.52 percent of yearly GDP over the analysis period, the report noted – with the highest incidence (GH¢5.2billion) recorded in 2018.

The figure translates to about GH¢2.4billion annually over the period; almost double the approximately GH¢1.45billion spent on the flagship Free Senior High School (SHS) annually, and about 35 percent of government’s initially projected receipts from the E-levy for 2022.

Tax and cash mismanagement were the most-often cited factors, accounting for 65.49 percent (GH¢9.13billion) and 21.4 percent (GH¢2.9billion) respectively of the fiscal profligacy in the period under review.

The central management institution – the Ministry of Finance and its subsidiary agencies, led by the Ghana Revenue Authority (GRA) as well as the Controller and Accountant-General’s Department (CAGD) – took the largest share of the cake for fiscal irresponsibility.

“The Ministry of Finance is responsible for 99.63 percent (GH¢9.10billion) of the combined GH¢9.12billion tax irregularities from 2015 to 2020… this was caused by failure of the Ghana Revenue Authority (GRA) to collect taxes due the state and enforce compliance,” Imani Africa stated.

The cash irregularities were largely driven by unapproved disbursement of funds, unapproved transfer of funds and delays in the lodgement of public funds into the respective public accounts.

Coming in second place was the Ministry of Health, which briefly overtook Finance in 2020. The Ministries of Roads & Highways, Employment as well as Foreign Affairs complete the top five worst-offending institutions as stores/procurement, payroll, rent and contract irregularities contributed relatively less, yet significantly, to the malaise.

Speaking at the report’s launch in Accra, Research Consultant with Imani, Dennis Asare, cited weak compliance and enforcement; weak oversight, monitoring and evaluation of MDAs; as well as weak enforcement of sanctions as the key drivers and enablers of the financial irregularities.

Other factors he mentioned were low revenue mobilisation and ineffective internal control systems.

“When we put all these together, they combine to create a high degree of tolerance for abuse of the public financial management system – leading to the consistent levels of irregularities that we have recorded over the years. The analysis provides enough evidence to suggest that the PFM policies that we have implemented over the last six years have not yielded the intended results… the financial cost points to the weakness in budget execution and management,” he remarked.

Among the recommendations Mr. Asare proffered, increased independence for heads of such institutions from political interference was top.

He also called for rigorous application of the Disallowance and Surcharge mandate of the Auditor-General in instances of abuse, with similar enforcement of punitive measures by relevant authorities.

“We are yet to see the Attorney-General fully prosecute a public official for engaging in abuse of the PFM, and until we do that people would not be deterred,” he added.

Country Director at Oxfam International (Ghana), Tijani Hamza – whose outfit provided support for the project, said she is encouraged that her firm has aided in increasing transparency, accountability and citizens’ participation in the country’s fiscal responsibility framework.