Transport hikes push inflation to 27.6% in May 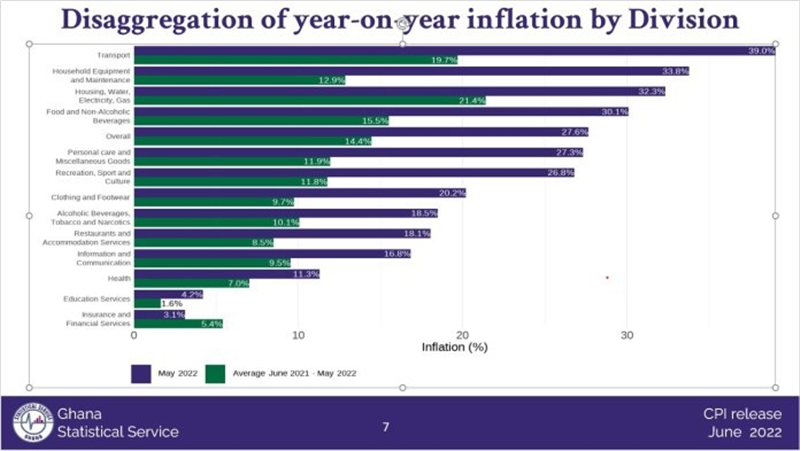 Consumer inflation – which measures changes in the price of a fixed basket of goods and services purchased by households in the country – increased by 4.0 percentage points from 23.6 percent recorded in the previous month, April 2022.

The data released by Ghana Statistical Service (GSS) show that four group items recorded rates higher than the national average of 27.6 percent. This was largely led by transport, which continued to dominate the price rises – recording 39 percent in May 2022 due to a 20 percent increase in transport fares during first-half of the month.

This was followed by household equipment and maintenance which recorded 33.8 percent; and housing, water, gas and electricity at 32.3 percent.

The food and non-alcoholic beverages basket was the fourth largest contributor to price rises in May, increasing by 30.1 percent.

According to GSS, in May 2022 twelve of the thirteen divisions recorded inflation rates higher than the rolling average from June 2021 to May 2022 of 13.5 percent. Among the top 10 items with the highest weight, bread recorded the highest inflation of 41.3 percent, followed by bus and trotro fares at 39.9 percent.

Cumulatively, this year the Monetary Policy Committee of the Bank of Ghana responded with a fairly aggressive policy rate hike by 450 basis points to 19 percent in a bid rein-in inflation expectations as well as foster macroeconomic stability.

However, this could not put the brakes on the momentum of consumer prices in the economy. Both headline and core inflation have stretched above the upper limit of the medium-term target band of 10 percent.

Dr. Ernest Addison, Governor of the central bank, said at the May 2022 MPC press briefing that the heightened uncertainty surrounding inflation dynamics has weighed heavily on the domestic environment, and significantly depressed business and consumer sentiments.

“The inflation numbers show that while food inflation has accounted for the increases in inflation over the past year, the recent jump in April shows that relative price increases in the non-food sector are accelerating at a fast pace, which provides information on the extent to which prices are rising,” he said.

The Bank’s latest forecast shows a continued elevated inflation profile in the near-term, with a prolonged horizon for inflation to return to the target band. Inflation expectations by consumers, businesses and the banking sector have also heightened.

The Governor said risks to the inflation outlook are on the upside, and emanate from the non-availability of inputs for food production, imported inflation, continued upward adjustments in ex-pump petroleum prices and transportation costs, possible increases in utility tariffs, and potential wage pressures.

“The second-round effects of these administered price adjustments will further amplify inflation pressures in the outlook,” he said.