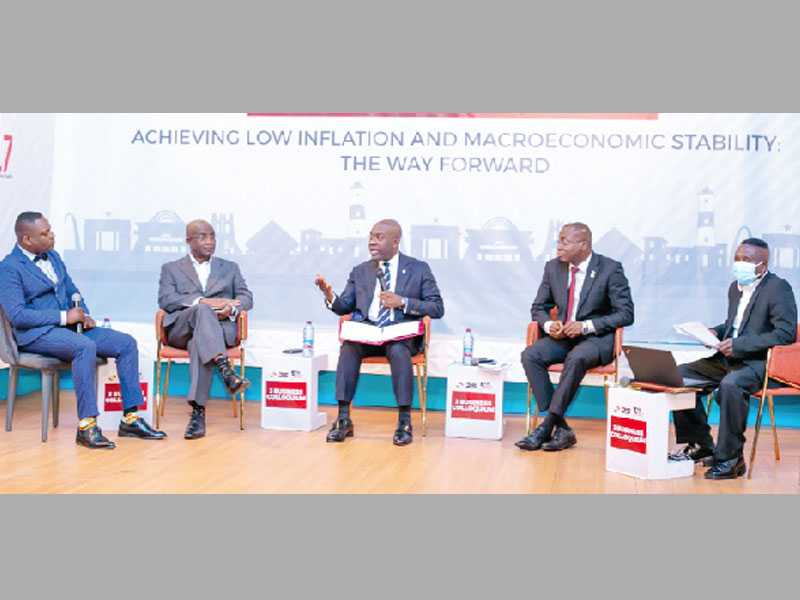 The country yesterday opened formal discussions with the International Monetary Fund (IMF) in Accra towards securing an economic support programme that can inject up to $3 billion into the economy.

The government is seeking the support of the fund to prosecute a three-year programme called the Enhanced Domestic Programme (EDP).

A team from the IMF, led by its Mission Chief, Carlo Sdralevich, yesterday met with the government’s team, which included the Minister of Finance, Ken Ofori-Atta, and the Governor of the Bank of Ghana (BoG), Dr Ernest Addison, in preliminary discussions meant to gather relevant data on the state of the economy to help inform the direction that the IMF’s support should take.

Daily Graphic sources said the discussions, which included key technical experts on the economy and other sectors, kicked off in the afternoon and were “going well”.

A meeting between the IMF team and the Vice-President, Dr Mahamudu Bawumia, is scheduled to take place today as part of the data gathering process.

As of yesterday, the team had not scheduled any meeting with the President, Nana Addo Dankwa Akufo-Addo, the sources said.

They, however, said meetings with the Ministry of Finance and the BoG would be daily.

The sources said the discussions represented the first point of contact between the government and the fund in the lead up to negotiations that could run for the next six months, using previous and other countries’ experiences as bases.

The funds would be disbursed in tranches, with each tranche conditioned on the meeting of agreed economic and policy targets by the government.

The sources said the support would likely run for 36 months, during which the IMF would be expected to guide the government to improve on the country’s external sector, reduce the debt to sustainable levels, narrow the fiscal deficit, regain and strengthen investor confidence and institute institutional reforms to strengthen the economy.

It would also seek to ease budget rigidities and strengthen monetary policy with the aim to consolidating the gains chalked up under the previous IMF programme, they said.

The proposed programme, according to the Ministry of Finance, sought to improve the credibility of government policies and restore investor confidence in the economy.

The policy credibility is important in regaining access to the capital market to raise long-term funds, boosting development partner disbursements and unlocking other financing sources.

The support of the fund, the government believes, will also help restore debt sustainability and macroeconomic stability to support green growth, economic transformation and job creation, while protecting social spending.

It will also strengthen the central bank’s monetary policy regime and build buffers to strengthen resilience to economic shocks.

As a member of the IMF, Ghana has benefited in various forms from the fund, which acts as a technical advisor and lender of last resort to developing countries facing financial challenges.

Since joining the IMF in September 1957, Ghana has been under 17 of its programmes, with the most recent one being the $918 million ECF programme which ended in 2019.

In 2020, the fund disbursed $1 billion in free unconditional support to the government under its rapid credit facility (RCF) to help quicken the economy’s recovery from the COVID-19 pandemic.

The latest programme, if approved, will be attached to economic conditions that the government will have to meet to qualify for the tranched release of the funds.

At a panel discussion on the 3 Business Colloquium on Ghana’s Road to the IMF yesterday, the Minister of Information, Kojo Oppong Nkrumah, gave an assurance that the government would safeguard the country’s interest in its negotiations with the IMF.

He said to him, the current administration had a proven track record of putting Ghana first and as such it would do its best to negotiate a better deal with the IMF.

“What we can do is look at the last two occasions that we negotiated with the fund. Some time in 2018 when we negotiated an extension of the ECF, we had rolled out a number of social protection programmes and there was that debate on whether we were going to lose that programme in lieu of that one year extension.

“But we succeeded in showcasing the kind of growth happening in the economy, for which reason we should be allowed to keep those programmes,” he said.

Mr Oppong Nkrumah added that just last year when the country went for a $1 billion facility, it also preserved the programmes.

“So if you look at the evidence of the last two negotiations, we can be optimistic that we will do our best to get the best deal for Ghana,” the minister said.

The discussions followed a directive by President Nana Akufo-Addo to Mr Ofori-Atta to open talks with the fund, with the view to securing economic support.

It followed the emergence of the COVID-19 pandemic and the Russia/Ukraine war, which worsened the country’s economic challenges, resulting in increased debt accumulation, rising inflation, a weakening cedi and the depletion of international reserves.

A credit downgrade earlier this year had also led to the country being denied access to the international capital market for borrowing, at a time when domestic revenue mobilisation had weakened.