Historic Cascade of Defaults Is Coming for Emerging Markets 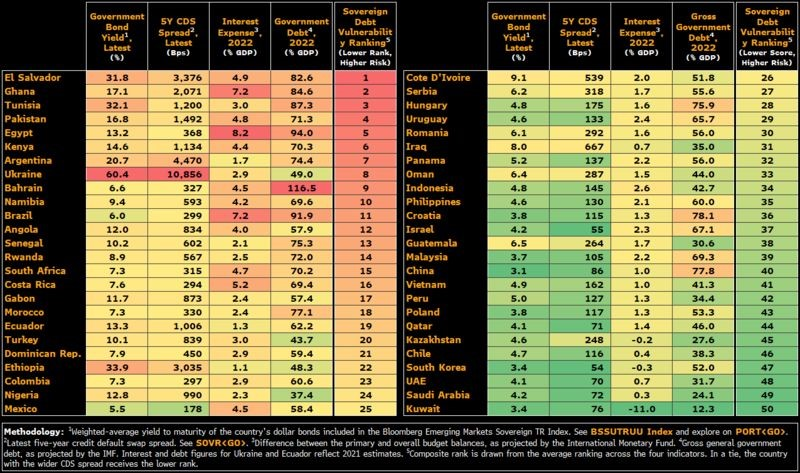 A quarter-trillion dollar pile of distressed debt is threatening to drag the developing world into a historic cascade of defaults.

Sri Lanka was the first nation to stop paying its foreign bondholders this year, burdened by unwieldy food and fuel costs that stoked protests and political chaos. Russia followed in June after getting caught in a web of sanctions.

“With the low-income countries, debt risks and debt crises are not hypothetical,” Reinhart said on Bloomberg Television. “We’re pretty much already there.”

The number of emerging markets with sovereign debt that trades at distressed levels — yields more than 10 percentage points above that of similar-maturity Treasuries, which can indicate investors believe default is a real possibility — has more than doubled in the past six months, according to data compiled from a Bloomberg index. Collectively, those 19 nations are home to more than 900 million people, and some — such as Sri Lanka and Lebanon — are already in default.

At stake, then, is $237 billion due to foreign bondholders in notes that are trading in distress. That adds up to almost a fifth — or about 17% — of the $1.4 trillion emerging-market sovereigns have outstanding in external debt denominated in dollars, euros or yen, according to data compiled by Bloomberg.

And as crises have shown over and over again in recent decades, the financial collapse of one government can create a domino effect — known as contagion in market parlance — as skittish traders yank money out of countries with similar economic problems and, in so doing, accelerate their crash. The worst of those crises was the Latin American debt debacle of the 1980s. The current moment, emerging-market watchers say, bears a certain resemblance. Like then, the Federal Reserve is suddenly ratcheting up interest rates at a rapid-fire clip in a bid to curb inflation, sparking a surge in the value of the dollar that is making it difficult for developing nations to service their foreign bonds.

Those under the most stress tend to be smaller countries with a shorter track record in international capital markets. Bigger developing nations, such as China, India, Mexico and Brazil, can boast of fairly robust external balance sheets and stockpiles of foreign currency reserves.

But in more vulnerable countries, there's widespread concern about what's to come. Bouts of political turmoil are arising around the globe tied to soaring food and energy costs, casting a shadow over upcoming bond payments in highly-indebted nations such as Ghana and Egypt, which some say would be better off using the money to help their citizens. With the Russia-Ukraine war keeping pressure on commodity prices, global interest rates rising and the US dollar asserting its strength, the burden for some nations is likely to be intolerable.

For Anupam Damani, head of international and emerging-market debt at Nuveen, there’s deep concern about maintaining access to energy and food in developing economies.

“Those are things that are going to continue to resonate in the second half of the year,” she said. “There’s a lot of academic literature and historical precedence in terms of social instability that higher food prices can cause, and then that can lead to political change.”

A quarter of the nations tracked in the Bloomberg EM USD Aggregate Sovereign Index are trading in distress. Of course, market trading doesn’t determine which countries will actually be able to pay in the end, and not all of them are likely to default.

The gauge has tumbled almost 20% this year, already exceeding the full-year loss it notched during the global financial crisis in 2008. Some of that, of course stems from big losses in underlying rate markets, but credit deterioration has been a major driver for the most distressed nations2.

Samy Muaddi, a portfolio manager at T. Rowe Price who helps oversee about $6.2 billion in assets, calls it one of the worst sell-offs for emerging-market debt “arguably in history.”

He points out that many emerging markets rushed to sell overseas bonds during the Covid pandemic when spending needs were high and borrowing costs were low. Now that global developed-market central banks tighten financial conditions, driving capital flows away from emerging markets and leaving them with heavy costs, some of them will be at risk.

“This is an acute period of challenge for many developing countries,” Muaddi said.

Risk aversion has also spread to active traders who are snapping up insurance against default in emerging markets. The cost is lingering just below the peak seen when Russian troops invaded Ukraine earlier this year.

“Things can get worse before they get better,” said Caesar Maasry, head of emerging-market cross-asset strategy at Goldman Sachs Group Inc., in a Bloomberg Intelligence webinar. “It’s late cycle. There’s not a strong recovery to buy into.”

That’s sent foreign money managers marching out of developing economies. They pulled $4 billion out of emerging-market bonds and stocks in June, according to the Institute of International Finance, marking a fourth straight month of outflows as Russia's invasion of Ukraine and the war’s impact on commodity prices and inflation dragged on investor sentiment.

“This could have really long-term impacts that actually change the way we think about emerging markets, and in particular, emerging markets in a strategic context,” said Gene Podkaminer, head of research at Franklin Templeton Investment Solutions. “The first thing it does is to reaffirm the reputation of emerging markets — they are volatile. There were certainly periods of time when investors perhaps had forgotten that, but it’s hard to ignore that fact now.”

Ballooning bond spreads are also a special concern for central bankers, who are seeing an increasingly stark trade-off between tightening interest rates to protect currencies and damp inflation versus staying accommodative to help keep fragile post-Covid recoveries on track. Multilateral institutions like the International Monetary Fund have also have warned of further on-the-ground strife associated with the burden of soaring costs of living, especially where governments are ill-placed to provide a cushion for households.

Sri Lanka’s political turmoil was fanned by sweeping electricity cuts and surging inflation that deepened inequality. That’s something Barclays Plc analysts led by Christian Keller warned could be repeated elsewhere in the second half this year.

“Populations suffering from high food prices and shortages of supplies can be a tinderbox for political instability,” his team wrote in a mid-year report.

The Central American nation’s rating has been slashed by credit assessors as its dollar bonds slumped, driven by the sometimes-unpredictable policies of President Nayib Bukele. The adoption of Bitcoin as legal tender, plus moves by Bukele’s government to consolidate power, has spurred concern about El Salvador’s ability and willingness to stay current on foreign obligations — especially given its wide fiscal deficits and an $800 million bond coming due in January.

These nations are among the less-frequent and lower-rated borrowers with low reserve buffers that Moody’s Investors Service warns will be vulnerable to rising borrowing costs. The African sovereigns have relatively low amounts of foreign reserves on hand to cover bond payments coming due through 2026. That could become an issue if they are unable to roll over their maturing notes due to the increased cost of tapping foreign debt markets. Ghana is seeking as much as $1.5 billion from the IMF. Egypt has almost $4 billion due on external debt in November 2022 and another $3 billion in February 2023, according to data compiled by Bloomberg.

Pakistan just resumed talks with the IMF as it runs thin on dollars for at least $41 billion of debt repayments in the next 12 months and to fund imports. Reminiscent of events in Sri Lanka, protesters have taken to the streets against power cuts of as long as 14 hours that authorities have imposed to conserve fuel. While the finance minister said the nation has averted a default, its debt is trading in distressed levels.

The South American nation is lingering in distress after the most recent of its nine defaults, which took place in 2020 during a pandemic-fueled recession. Inflation is expected to top 70% by year-end, adding to pressure on authorities to limit the flight of dollars out of the economy to control the exchange rate. At the same time, a new finance minister and political infighting between President Alberto Fernandez and his Vice President Cristina Fernandez de Kirchner have clouded the outlook for the economy ahead of elections in 2023.

The invasion of Russian troops has led to the exploration of debt restructuring by Ukrainian officials as the war-ravaged country’s funding options are at risk of running out, according to people familiar with the discussions. The nation has also indicated that it needs between $60 billion and $65 billion this year to meet funding requirements, billions more than its allies have so far been able to pledge. Policy makers in Kyiv are struggling to keep the budget running as the military fends off Russia’s invasion, which has destroyed cities, brought the nation’s key grain exports to a standstill, and displaced more than 10 million people. The nation also unveiled a longer-term reconstruction plan that could exceed $750 billion.