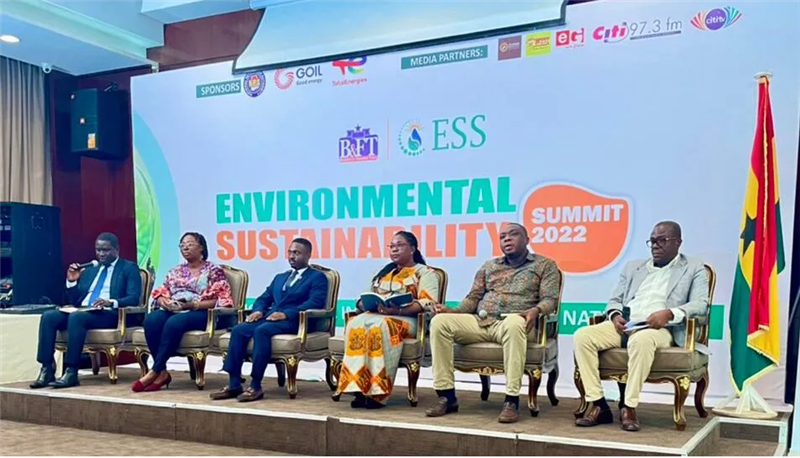 Time is running out to address issues around environmental sustainability, and there is a desperate need for dedicated efforts from all stakeholders to change the narrative – with enormous benefits, economic and otherwise, to be gained; as well as dire consequences for inaction.

This was the overwhelming position held by a number of environmental experts speaking during the maiden Environmental Sustainability Summit (ESS) organised by the B&FT, on the theme ‘The Socio-Economic Impact of Pollution on Natural Life’.

They were in agreement that the global increase in average temperature, otherwise known as climate change, is undeniably affecting Ghana’s climate – adding that it is evident in a number of environmental phenomena such as erratic rainfall duration and intensity, rising sea-level and consequent coastal flooding, extreme heat, drought, desertification and loss of biodiversity.

In his remarks, Ambassador of the Netherlands Embassy to Ghana, Jeroen Verheul, said despite Africa’s contribution to greenhouse gas (GHG) emissions being lower than the global average – with fuel in Ghana accounting for approximately 35 percent of GHG emissions versus the global average of over 70 percent – the prevailing global shift toward more sustainable forms of energy will put the continent at a disadvantage if it fails to act fast.

To this end, he said, Ghana must decide on what energy mix will be ideal as it embarks on a transformation of its economy.

“Currently, the number of renewable energy sources being used remains low. The question must be: ‘Can you enhance the amount of renewables to replace fossil fuels?’” he noted.

“In order to save the planet for ourselves and our children, we must promote green growth through the economy, energy and the environment,” he added.

According to the International Monetary Fund (IMF), the present value of total financing conditional on commitments to scrap coal is around US$29trillion globally, with an estimated gain of US$78trillion over coming decades by making this energy transition.

“That works out to between US$500billion and US$2trillion annually, with a front-loaded US$3trillion investment this decade. Of the global financing need at around US$29trillion, we estimate that 46 percent is in Asia, 18 percent in Europe, 13 percent in North America, 13 percent in Australia and New Zealand, 8 percent in Africa, and 2 percent in Latin

America and the Caribbean,” the Fund notes.

On his part, Deputy Minister in charge of Lands and Natural Resources, Benito Owusu-Bio – representing sector minister Samuel Jinapor, underscored the triple threat of air, water and land pollution to the environment and economy.

“More specifically, Ghana is associated with air-pollution – which for a very long time has taken the lives of many citizens.”

This is consistent with a study by air quality technology company IQAir, which placed Accra as having the second-worst air pollution levels in Africa for 2019 – largely due to activities at the Agbogbloshie e-waste dumpsite.

Mr. Owusu-Bio reiterated warnings that “developing countries will bear the brunt of these adverse consequences of climate change… because of high vulnerability levels and low adoption capacities”.

Detailing a lengthy catalogue of initiatives the ministry has undertaken to address these issues, he called for increased public-private partnerships to attain the transition goal.

“The issues are fundamental threats to economic stability, and therefore requires thoughtful management, prudent investments and technological innovation from both the public and private sectors of our economy.

“The ministry is fully committed to ensuring environmental sustainability and is ready to partner with any institutions which orient their efforts in this direction,” he said.

On a similar tack, the Dean of Students, School of Sustainable Development at the University of Environment and Sustainable Development (UESD), Dr. Danielle Sedegah, warned about the economic cost of environmental pollution to Gross Domestic Product (GDP), which stood at US$6.3billion or 10.7 percent of the 2017 GDP against a global average of 3.9 percent.

She added that the already vulnerable – women and children – remain the most-affected by environmental degradation.

Offering a rationale for the summit, Chief Executive Officer of the B&FT Dr. Godwin Acquaye said it was born out of the environment’s evident importance to economic and social prosperity, as well as the dearth of comprehensive coverage on such matters.

He reiterated the media outlet’s commitment to using its reach for driving conversations around relevant issues and measuring the impact of its initiatives.