Netherlands to phase out development aid to Ghana, 3 others 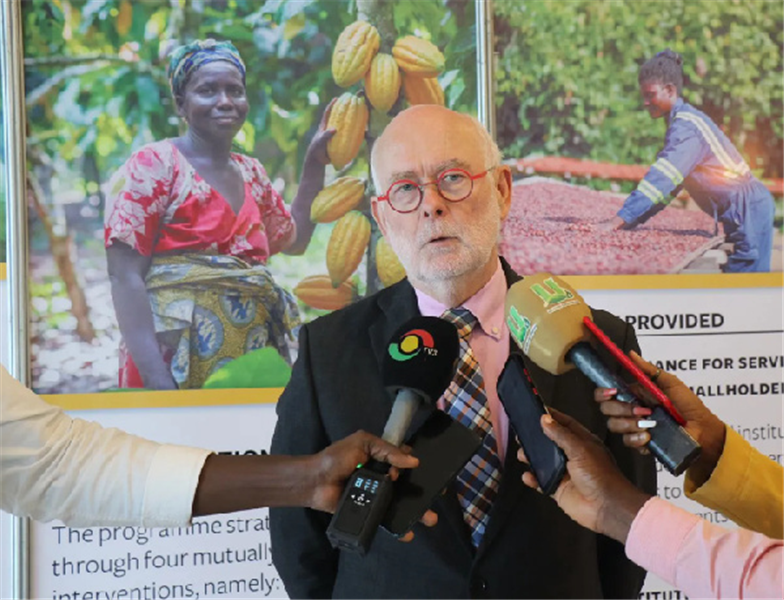 The Dutch government will no longer provide development aid to some four West African countries – Ghana, Côte d’Ivoire, Sierra Leone and Liberia – as it seeks to establish partnerships that provide mutual benefit, the Dutch Ambassador to Ghana, Jeroen Verheul, has said.

As the Netherlands moves away from being a donor/development partner, the new area of attention will be trade and investment promotion between it and the countries. This, according to Ambassador Verheul, is because that is a more sustainable and longstanding way to create relations.

To realise the improved income for cocoa farmers, he noted that the pricing of cocoa, productivity and efficiency would have to be critically considered, in addition to economies of scale.

“If you remain a small-scale farmer, it is very difficult to become productive and to become efficient,” he said, adding that scaling up production and enhancing efficiency is key to enhancing incomes in the cocoa sector.

Also, a new focus will be placed on employment enhancement. Unemployment, particularly among the youth, he said, is quite worrying, especially within countries where radicalisation and extremism have gained ground. Thus, the provision of an alternative career to a career in extremist activities will be an important benefit to take into account.

Furthermore, Ambassador Verheul, who was speaking in an interview at the sidelines of the close-out ceremony for the second phase of the Cocoa Rehabilitation and Intensification Programme (CORIP II), implemented by Solidaridad West Africa, indicated that the environment would also be one of the key areas to focus.

He said: “Reducing deforestation as a result of agro-production is a key element that will be considered. These areas will be our area of focus, and we will do that by focusing on several issues.”

Among these issues are regulations. To this end, he disclosed that the European Union is working on two important regulations – deforestation and responsible business conduct.

“These regulations will be coupled with national legislations to promote imports of sustainably produced agro-products.”

This follows rising concerns by consumers about sustainability and social issues in the cocoa sector; mainly child labour, deforestation and the lack of living income for the farmers.

The legislations are, therefore, to ensure that the products that are imported into Europe conform to standards, thus, not contributing to child labour and deforestation.

CORIP II was funded by the Embassy of the Netherlands and follows the successful implementation of the first phase (2013-2017), which demonstrated the business case for developing sustainable West African cocoa production through the setup and operation of service delivery models.

The four-year programme was implemented between November 2017 and December 2021. It focused on contributing toward the climate-smart intensification of existing cocoa production systems, leading to sustainable productivity improvements and economic returns for cocoa farmers in Côte d’Ivoire, Ghana, Liberia, and Sierra Leone.

Among key outcomes of CORIP II, it was revealed that the programme offered support to young entrepreneurs across implementing countries to establish 146 service delivery enterprises. The service centres provide critical professional services such as farm maintenance, labour, agro-inputs and tools, to cocoa farmers within the cocoa landscape of the four countries to boost their production capacity.

Also, it led to the creation of some 4,400 jobs by these small and medium enterprises (SMEs). Operating the service delivery models, an estimated 80,000 farmers reached by the SMEs increased their yields and transitioned out of poverty.