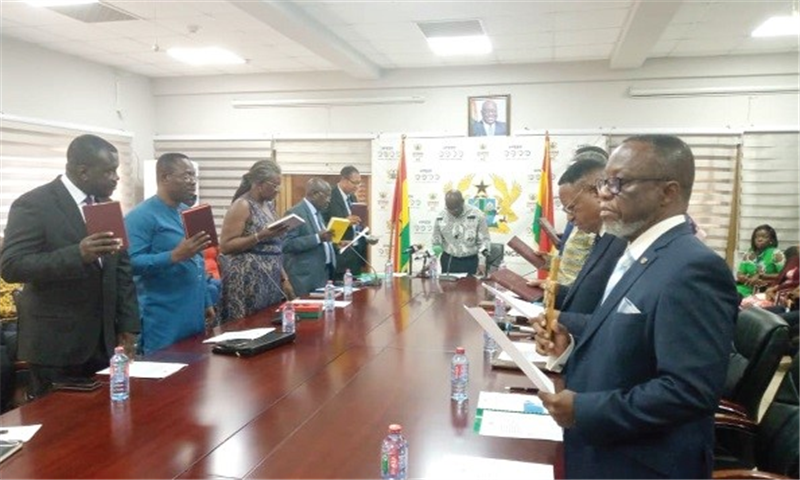 The country's first-ever Independent Tax Appeals Board has been inaugurated, with a call on the members to ensure speedy adjudication, accuracy and fairness in tax dispute resolution and transform the country's domestic revenue mobilisation efforts.

The 11-member board is chaired by Justice Lawrence Mensah, a retired Court of Appeal Judge, with members including the President of the Chartered Institute of Taxation, Nii Ayi Aryeetey; a retired Deputy Commissioner in charge of Special Duties at the Ghana Revenue Authority (GRA), Customs Division, Peter Kwame Abebrese; a retired Justice of the High Court, Justice Kwabena Asumanadu, and the Managing Partner, Tax and Legal Affairs at advisory firm, WTS Nobisfields, Theophilus Tawiah.

The rest are a retired Chartered Accountant, Emmanuel Obeng Asiedu; the Administrator of the Diaspora Affairs Department at the Office of the President, Fauziah Ibrahim, a lawyer and former Director of the Legal Directorate of the Ministry of Finance, Mangowa Ghanney; a retired Assistant Commissioner and Head of the Transport Unit at the GRA, Samuel Narh Ojangmah; the Managing Partner of ikern Associates Limited and ikern Chartered Accountancy, Isaac Nyame, and a Senior Manager for Banking Operations of Bond Savings and Loans Company PLC, Catherine Quaidoo.

That caused litigation of tax disputes dragging on indefinitely, locking up potential government revenue, generating costs for businesses and frustrating both the revenue authority and taxpayers, while the authority was also put in a situation where it had to litigate even on minor issues.

After leading the members of the board to swear the oath of office, the Minister of Finance, Ken Ofori-Atta, said the appeals board provided an intermediate avenue for the resolution of a tax dispute as taxpayers and the revenue authority could explore the option before deciding to litigate in the law court.

The establishment of the board, he said, was part of the government's initiatives to transform revenue administration and enhance revenue mobilisation.

Mr Ofori-Atta explained that despite revenue mobilisation efforts, Ghana's tax as a ratio of the Gross Domestic Product (GDP) of 13 per cent was one of the lowest in West Africa as the country’s peers were doing an average of 18 per cent.

He said the country’s annual corporate tax gap alone was estimated to be between nine per cent and 12 per cent of GDP.

"It gets worse when you look at the gap on import taxes and Value Added Tax (VAT). This must, as a matter of urgency, be addressed," Mr Ofori-Atta said.

Mr Ofori-Atta said tax disputes could lead to delays in revenue mobilisation, especially if they had to compete with the dispensation of justice in other segments of society.

He said an ADR mechanism would instill confidence in investors and reduce the time spent on litigation for both taxpayers and the revenue administration.

Mr Ofori-Atta, therefore, urged the members of the board to develop a strong tax dispute resolution system, capable of supporting the country’s revenue mobilisation drive.

"Provide a fair and independent forum for dispute resolution between taxpayers and the GRA. Make decisions based on the evidence presented and in accordance with the law, and encourage compliance with tax laws by providing clarity on the interpretation of tax legislations," he charged the board.

Mr Ofori-Atta assured the board of the Ministry of Finance's support to the creation of a “fit-for-purpose” Independent Tax Appeals Board that would earn the trust and respect of all stakeholders.

The Chairman of the board said the duty of the board was coming at a critical time when all citizens were required to put their shoulders to the wheel to protect the revenue generation system of the country.

"These and other decisions continue to provide strong jurisprudential support for the innovation that the Independent Tax Appeals Board is," he said.

Justice Mensah gave the assurance that the members would focus on ensuring that the board provided an efficient and effective forum for speedy resolution of disputes that could have created stress for market players and distorted government's income generation projections.