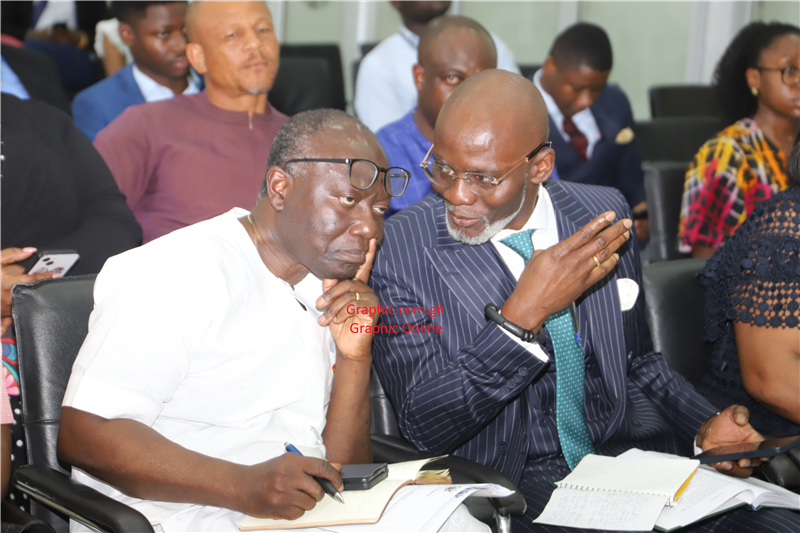 The Ad hoc Committee tasked to investigate the various allegations to justify the removal of the Minister of Finance, Ken Ofori-Atta, from office commenced hearing yesterday, with the proponents of the censure motion outlining seven grounds to substantiate their call to push out the minister to save the Ghanaian economy from further deterioration.

The lead proponent, Haruna Iddrisu, the Minority Leader, assisted by the Ranking Member on the Finance Committee, Dr Cassiel Ato Forson, supported the seven grounds with figures from official documents, such as budgets and fiscal data series from the Ministry of Finance website, to firm up their motion for Parliament to impeach Mr Ofori-Atta.

They mentioned the grounds as conflict of interest, unconstitutional withdrawal from the Consolidated Fund, illegal payment of oil revenues into offshore accounts, deliberate and dishonest misreporting of economic data to Parliament, fiscal recklessness, leading to the crash of the Ghana cedi, incompetence and frightening ineptitude and gross mismanagement of the Ghanaian economy.

To make their case, Mr Iddrisu tendered documents on which they are relying, including the Hansard on parliamentary debate on November 10, 2022, the Public Financial Management Act, the Fiscal Responsibility Act, 2018 (Act 982) and the Bank of Ghana Act, 2022 (Act 612).

Other documents on which they will rely are Article 82 of the 1992 Constitution, the Public Interest and Accountability Committee reports from 2018 to mid-2022, Staff Reports of the International Monetary Fund (IMF) under the rapid credit facility from 2018 to 2021, fiscal data from the Ministry of Finance website, the Fiscal Responsibility Act, 2018 (Act 982), the Petroleum Revenue Management Act, 2011 (Act 815), budget statements from 2019 to 2022 and mid-year budget statements presented to Parliament from 2019 to 2022.

They are also relying on the Auditor-General’s report from 2018 to 2020, as well as information they have compiled from internationally recognised analyst websites, such as Goldman Sachs and Bloomberg.

Originally, Mr Ofori-Atta was not due to appear before the committee, but he showed up at yesterday’s hearing in the company of his lawyer, Gabby Asare Otchere Darko, and his two deputies at the Finance Ministry, Dr John Kumah and Abena Osei-Asare, to apprise himself of the arguments being put up by the proponents of the censure motion to allow him to defend himself properly tomorrow.

Mr Ofori-Atta, dressed in his signature white ‘khaftan’ attire, was later joined by the Minister of National Security, Albert Kan-Dapaah.

The documents tendered were in response to a letter which the committee received from the Finance Minister, dated November 14, this year, which a co-chairman of the committee, Mr K.T. Hammond, had read out.

The letter, he said, had requested for specifics of the seven grounds (allegations) made against the minister by the motion proponents, as well as relevant evidential documents to enable him to properly defend himself.

Subsequently, both co-chairmen of the committee asked the proponents if there were any documents that they would be relying on for the purpose of making their case against the minister.

Furnish us with all documents

Unhappy with the list of documents being tendered by the proponents of the motion, counsel for Mr Ofori-Atta intervened and said per Article 23 of the 1992 Constitution, since the hearing was a quasi-judicial process, his client deserved a fair hearing.

Mr Otchere Darko said in the event matters did not go well at the hearing, the minister faced potentially the severest punishment a minister could get — removal from office.

He, therefore, requested for the full particulars of facts in respect of each of the allegations contained in their letter in order not to cause the minister to be ambushed right before the committee, “without any preparation to start answering questions”.

“Before we start this procedure, all we are asking for, in the interest of justice, is that we should be furnished with the full particulars of fact in support of each allegation contained in the letter.

“The documents are fine; before we look into the documents, we want the charges to be complete with the particulars,” Mr Otchere Darko said.

On November 10, this year, the Minority Leader moved a motion on a vote of censure on the floor of Parliament to compel the House to impeach the Finance Minister.

However, the Speaker of Parliament, Alban Sumana Kingsford Bagbin, referred the matter to the eight-member committee, co-chaired by the Member of Parliament (MP) for Adansi Asokwa, K. T. Hammond, and the MP for Bolgatanga East, Dr Dominic Ayine, to probe the allegations for prima facie evidence and report to the House in seven working days.

Based on the outcome of the hearing and the recommendations of the committee, the House will consider whether there are enough grounds to impeach and stop Mr Ofori-Atta from holding himself as the Finance Minister.

Leading evidence in each of the allegations contained in the motion, the Minority Leader dwelt on the ground of unconstitutional withdrawal from the Consolidated Fund.

Starting with the construction of the National Cathedral, Mr Iddrisu said nobody was against the President promising and honouring God with a cathedral.

He, however, said public resources for such project should be approved by Parliament.

Contrary to that, he cited how a warrant signed by the Finance Minister on October 29, this year, led to the expenditure of GH¢142.76 million being allocated for the construction of the cathedral and asked if such an allocation was approved by Parliament.

On the deliberate and dishonest misreporting of economic data to Parliament, the Minority Leader referred to the Auditor-General’s report and said per reports by the World Bank and the International Monetary Fund (IMF), Ghana’s national debt stock exceeded GH¢450 billion.

“As it was inherited in 2017, it was GH¢120 billion and the amount of money we now spend to service debt as of the end of 2021 was GH¢37 billion, ballooning to GH¢45 billion estimated by the close of this year.

“This can only be as a result of irresponsible borrowing,” Mr Iddrisu said.

He also reflected on the escalating inflation in the country to buttress his point.

He also cited the President’s broadcast to the nation on Sunday, October 30, this year about how high inflation had contributed to unacceptable hardship facing Ghanaians today, saying “we are holding the Minister of Finance wholly responsible for that”.

Mr Iddrisu said in 2017, $1 was equivalent to GH¢4.2, but today $1 was GH¢15 and highlighted how the cost of doing business had become unacceptably high.

“The pharmaceutical industry is complaining because it affects their imports and they are made to pay more,” he said, adding that the depreciation of the cedi had even affected Makola women because they could not trade effectively, as they made loses due to the consequence of borrowing.

Quoting from the Auditor-General’s report of December 31, last year, he said the annual budget funding amount reported by the Ministry of Finance was GH¢2.06 billion, whereas the Controller and Accountant General reported GH¢3.3 billion, a variance GH¢1.3 billion.

Dr Forson also told the committee that the government had since been misreporting economic data to Parliament with the aim of misleading the House and the investor community.

That was mainly to create the false impression to Parliament that the Finance Minister had complied with the Fiscal Responsibility Act, 2018 (Act 982), when that was not the case, he said.

Quoting Act 982, he said in spite of a set of rigid rules on fiscal responsibility, Ghana’s debt had become unsustainable.

“What we have seen over the years, even though the Finance Minister has been presenting some economic data to Parliament, is that in 2018, our minister and the government had said to Parliament that the fiscal deficit was 3.9 per cent of Gross Domestic Product (GDP).

“The reason they said it was 3.9 per cent of GDP was that a key expenditure worth GH¢9.8 billion was excluded from the fiscal account, as they treated it below the line and that had to do with financial sector payment.

“The law says that anytime you reach six per cent, the vote of censure must happen and this law was assented by the President on December 28, 2018,” Dr Forson stated.

He added that if the GH¢9.8 billion was to be accounted for to include what was excluded and treated below the line, “the actual fiscal deficit for 2018 was 7.1 per cent of GDP, which clearly means that the censure motion in line with Section 4 of Act 982 triggers,” he said.

He added that in 2019, Mr Ofori-Atta informed Parliament that the fiscal deficit was 4.8 per cent of GDP, while excluding the financial sector payment of GH¢3.1 billion and energy payment of GH¢5.1 billion from the fiscal accounting.

“So if you are to factor in all of that, the fiscal deficit is actually 7.1 per cent of GDP, at a time when the fiscal rules had not been suspended, breaching sections 2 and 4 of Act 982,” he said.

On conflict of interest, he recalled what the minister told Parliament in answer to a question that his company, Databank Financial Services Limited, made GH¢159.3 million as book runners for bonds between 2017 and 2021.