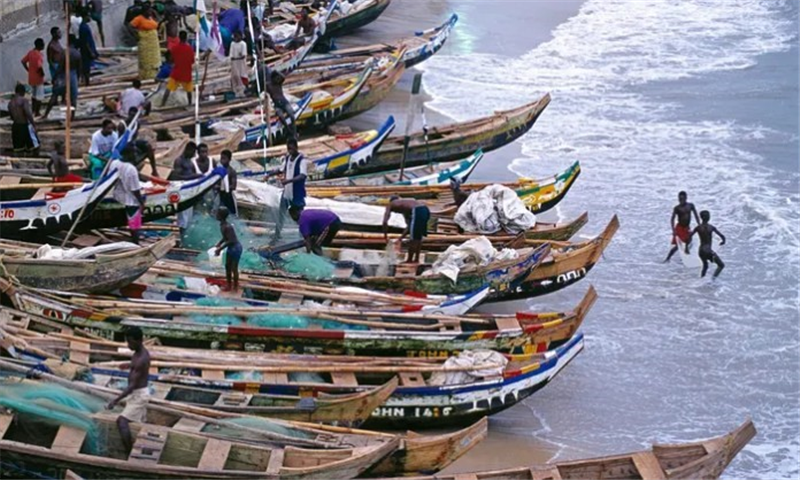 Fisheries, which millions of Ghanaians depend on, are at risk of collapse as a result of rampant illegal fishing and overfishing by Chinese-owned industrial trawlers, and a culture of corruption has allowed these crimes to go unpunished, according to a new investigation from the Environmental Justice Foundation (EJF).

EJF’s investigations blow the whistle on systemic bribery and intimidation, resulting in egregious human rights abuses on-board fishing vessels in Ghana’s waters, alongside shocking illegal fishing. EJF calls for cooperation and urgent action by the Ghanaian Government and its international partners to bring the industry out of the shadows, to avert the ecological and social crises, and secure sustainable, legal and ethical fisheries in the Ghanaian fleet.

Ghana is home to over 200 fishing communities, with almost 3 million people in the country reliant on small-scale fisheries for their livelihoods. These livelihoods are now at risk, in large part, because of illegal, unreported and unregulated fishing by the industrial trawl fleet. This is believed by EJF to be at least 90 percent owned by Chinese beneficiaries, flouting Ghanaian laws on foreign ownership.

EJF has previously documented these trawlers illegally targetting small pelagic species – including those referred to as ‘the people’s fish’ – and selling them back to the communities who would have caught them, a practice known as ‘saiko’ fishing. This illicit trade was originally conducted at sea, largely under the cover of darkness. Trawlers transferred frozen blocks of fish to specially adapted canoes which went on to sell it to local markets.

Following government action to halt the illegal trade in September 2021, this practice appeared to have stopped. However, instead of disappearing, the activity has only become more open. EJF investigators tracked large volumes of small pelagic species and juvenile demersal fish, placed in cartons and sold at the country’s major industrial port for onward distribution across the country.

The report draws on interviews with a Ghanaian crew who witnessed abuses first-hand and filmed evidence, a network of informants and analysis of vessel tracking data. All of those interviewed said that there was insufficient food on-board vessels, 94 percent had restricted access to clean water, and 81 percent had witnessed or experienced physical violence. Furthermore, 92 percent had seen fish illegally dumped at sea, 81 percent stated they had witnessed their captains illegally entering waters reserved for canoe fishers, 64 percent had seen the illegal targetting and capture of non-target species, and 53 percent testified to the use of illegally adapted fishing gears.

The picture which emerges, EJF claims, is one of systemic corruption enabling illegal fishing and human rights abuses to go unreported and unpunished in the country’s waters, with almost 90 percent of crew interviewed witnessing corruption from authorities.  EJF believes that the web of corruption is so deep and entangled that sustainability and the defence of human rights is impossible without substantial reforms.

The Ghanaian Government, particularly the Ministry of Fisheries and Aquaculture Development, can reverse this and ensure sustainable fisheries; but it must act by building on its laudable recent positive actions to reform parts of the industry, according to the report.

Steve Trent, EJF CEO and Co-Founder, said: “In recent months, the Minister of Fisheries, Mavis Hawa Koomson, has taken several positive actions and these are to be applauded. However, the extent of illegal fishing and corruption in Ghana’s fisheries across its largely foreign-owned industrial fleets remains highly damaging, presenting a direct threat to the livelihoods and food security of millions of Ghanaians, and threatening the collapse of Ghana’s fisheries. The illegal targetting and landing of small pelagic species and juvenile fish completely undermines the livelihoods and food security of millions of small-scale fishers.

“Although the need to act is urgent, the Ghanaian Government can take practical, cost-effective measures to ensure sustainable, transparent fisheries. Stronger oversight actions to tackle illegal fishing and an end to illegal landings will have immediate, lasting benefits for all Ghanaians.”