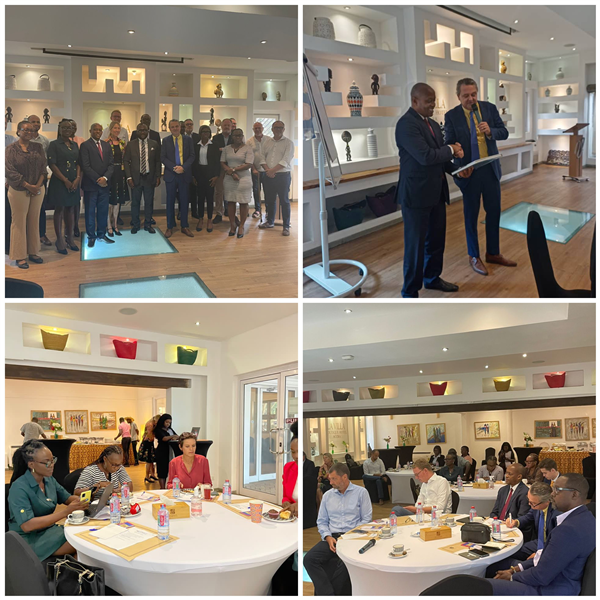 Tuesday morning the 13th of December GNBCC welcomed the Premium Members for its annual Business Breakfast. This year it was held for the 1st time in the Villa Boutique Hotel, Osu.

As from 8 am in the morning participants arrived and could enjoy a nice breakfast . The morning was opened by GNBCC’s General Manager Tjalling Wiarda who also acted as the MC of the business breakfast.

First Deputy Ambassador Mrs Katja Lasseur spoke briefly about the new policy direction of the Embassy , especially the focus on Horticulture and Cocoa. After her the main speaker Mr Vish Ashiagbor, Senior Partner of PwC , was invited to do a presentation on the just presented budget in light of the theme of the breakfast: Ghana as investment destination.

In general the GoG reacted late , it only acknowledged the economic crisis in October. The biggest problem are the high expenditures – 191 billion - of which 88% is needed for the government payroll, government grants and interest payments on debts.

The presented solution is to increase tax income, restructure debts and cut expenses. To increase tax income the GRA will go after the so called ‘low hanging fruit’ meaning more pressure on current existing and registered taxpayers (including business).

Budget is not clear how the GoG is going the cut expenses and more detail is expected from the GoG. During the morning it was announced that the GoG made a new three-year Extended Credit Facility (ECF) arrangement, worth around US$3billion or SDR 2.242billion with the IMF.

Even with this deal the expectation remains that the coming 6 months will be difficult for a lot of business in Ghana. After Mr Ashiagbor’s clear presentation Mr Wiarda held a short introduction as preparation for our other main guest, Mr Yaw Amoateng Afriyie , Deputy CEO of the Ghana Investment Promotion Centre (GIPC).

in his introduction Wiarda mentioned the constant challenges of the investment and business community such as high threshold when investing in Ghana as stipulated in the GIPC act, the undressing of the benefits of the Freezone status, overruling of agreed GIPC investor  benefits by sector commissions such as the NCA, Minerals , Energy or Petroleum commission , GRA issues such as multiple tax law enforcement  agencies performing  regulatory functions often duplicating and overlapping each other. The new government measures announced in the budget such as: review of tax exemptions for Freezone companies; Freeze on new waivers for foreign companies ; increase of standard VAT from 12,5% to 15% ; introduction of a 35% marginal income tax rate for individuals ;  restriction of foreign exchange loss deduction to actual losses all add up to measures which increase the costs of doing business in Ghana.

Mr Afriyie explained that this year the investment in Ghana lowered with 21% what also had to do with the fact that Ghana was shut out of the capital market (after the downgrades of the rating agencies)  . GIPC act : GIPC prefers no minimum equity requirement ; the equity requirement is not good especially for servicing companies who want to set up in Ghana. The investment code should be changed. GIPC is fighting measures of localization (of Mineral, Energy Commission) which overrule GIPC. On the tax waivers: GIPC only organizes waivers for strategic foreign investors; Of all waivers for exemptions only 4% of exemptions has been organised by GIPC to support investors; 96% of exemptions is due to other Ghana agencies. GIPC wants to reform , wants to have a more flexible attitude

After that the audience could pose a number of questions to Mr Afriyie and Mr Ashiagbor such as on the long waiting time to get technology transfers registered – the changing rules if you want to invest into the petroleum sector plus the fact that you have to set up 2 companies – a local company and a joint venture. Also it was mentioned that GIPC and GoG need to be aware that new potential investors contact current existing companies who already have invested in Ghana to ask about their experiences. GIPC has installed just recently an after care division and hopes to become a rally point for existing investors who experience issues.

Around 10.30 Mr Wiarda closed off the business breakfast and especially thanked Mr Ashaigbor as well as Mr Afriyie for their constructive and clear presentations . Finally a group picture was made.  We hope to see everyone again next year !